US to End Boycott of India’s Modi Ahead of Election 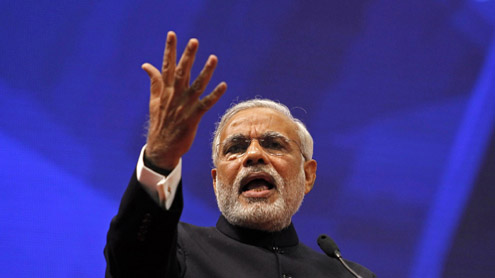 The US ambassador to India will Thursday meet opposition prime ministerial candidate Narendra Modi, as Washington ends a near decade-long boycott of the controversial Hindu nationalist leader tipped to win this year’s election. Ambassador Nancy Powell’s encounter with Modi would put the United States in line with European nations and Australia, which have already restored ties with him amid growing indications that he will take the helm of the world’s largest democracy in polls due by the end of May. Modi, a contentious political figure who is the chief minister of western Gujarat state, is accused by human right groups of turning a blind eye to communal riots in 2002 that killed up to 2,000 people, mostly Muslims.

The United States in 2005 revoked a visa for Modi under a domestic law that bars entry by any foreign official seen as responsible for “severe violations of religious freedom”. Modi has denied wrongdoing and investigations have cleared him of personal blame, although one of his former ministers was jailed for life for instigating the killing of 97 Muslims. But signalling a turnaround this week after years of shunning him, the United States confirmed the appointment between Modi and Powell, without specifying a date. However a senior source in Modi’s office said Powell will meet him on Thursday morning in Gandhinagar, the capital of Gujarat. “The exact venue for the meeting is not being disclosed because of security reasons,” the source told AFP.

Modi, 63, is the prime ministerial candidate of the main opposition Bharatiya Janata Party (BJP), which is ahead of the incumbent Congress party in opinion polls. He has sought to portray himself as a business-savvy leader who can champion India’s economy and tackle corruption after a decade of rule by the left-leaning Congress party. Neelam Deo, a former diplomat and foreign policy expert, said the US overture to Modi reflected the “assessment… that the BJP candidate has a good chance of coming ahead in the elections”.

Foreign ambassadors are also engaging with Modi because “of their own companies seeking business opportunities in Gujarat, which has certainly grown more rapidly than many of the other state in India”, she said. The United States and India have built a growing relationship since their estrangement in the Cold War, with most US lawmakers supportive of ties with New Delhi. But Modi has faced opposition from an unlikely mix of left-leaning members of the US Congress active on human rights and other conservative politicians. A congressional aide has said a meeting with Powell would send a signal of US openness on issuing a visa.

But some US officials are believed to be worried that bitterness over the past visa rejection would cloud relations with Modi if he becomes prime minister. Concerns over personal treatment are hardly new to the US-India relationship. In December, the two countries went through one of their worst crises in years when US authorities arrested a New York-based Indian diplomat on charges of underpaying her servant and lying on the worker’s visa form.

Indian lawmakers and commentators accused US authorities of humiliating the diplomat through a strip-search. The row abated a month ago when the diplomat, Devyani Khobragade, was allowed to return to India just as she was indicted. Both governments have since voiced hope at moving forward. But the United States earlier Monday renewed one rift when it announced it would take India to the World Trade Organisation in hopes of opening up its booming solar power industry.  -Dwan