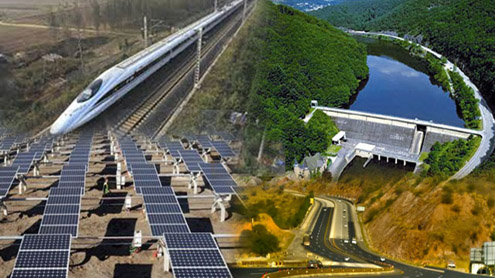 China has agreed to invest around 52 billion USD in major projects to include dams, motorways, fiber-links, garments city, mineral resources, energy sector including coal, construction of tunnels, economic corridor, Gwadar port, oil refinery, railway, and agriculture. According to reports, Pakistan and China are working on several strategic projects to curb Pakistan’s deep energy crises for this purpose Pakistan wants to have 8800 Mega watts of atomic power till 2030.

Estimated to be 22 billion USD projects include Thar coal project in Sindh and hydro-electric projects in KPK. Furthermore, Wallstreet Journal has reported that Pakistan is eyeing to acquire atomic energy plants for electricity to be installed in Punjab. Pakistan is also working with China to build its infrastructure as recently inaugurated Gwadar to Kashghar corridor will benefit 3 billion people across the four provinces. According to the plan, special economic zones with special tax exemptions will be built every 200 miles.

This 2,400 km long economic corridor will include Mansehra, Abbottabad, Islamabad, Mianwali, DG khan, Khuzdar and Turbat. This will also uplift the infrastructure in AJK and Gilgit baltistan. The report said that China will also help Pakistan setup new railway tracks. Pakistan Railways has submitted a request for funds to Planning Commission to prepare a pre-feasibilty report of setting up railway tracks from Islamabad to Murree and Muree to Muzafarabad. This report will be prepared by Pakistani and Chinese engineers. This 107 km long track will be built with 50 bridges over beautiful lakes and tunnels across different mountains.

By this project, 5 million commuters will be benefited annually. Pakistan is also working on Karachi-Lahore motorway. This 1160 km long motorway will connect Karachi, Hyderabad, Dadu, Sukker, Rohri, Pannu Akhel, Ghotki, Obara, Raheem Yar Khan, Sadiqabad and Multan. This six lane road will be built over terrain composed of mainland, mountains and plateaus. Three bridges will also be constructed over River Sindh, Satlaj and Ravi. These mega-projects along with several others will help Pakistan a stable economy. Inorder to execute these projects, senior Pakistani leadership has assured Chinese counterparts to improve law and order situation in country. Thenewstribe