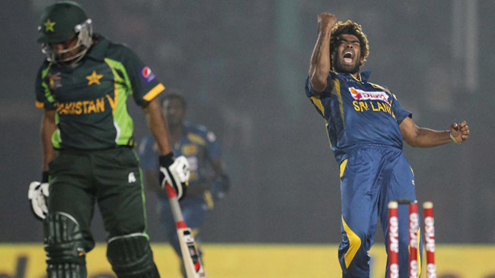 Bangladesh: Sling-arm fast bowler Lasith Malinga grabbed five wickets in a devastating final spell to lead Sri Lanka to a 12-run win over defending champions Pakistan in the opening match of the Asia Cup in Fatullah on Tuesday. Pakistan, chasing Sri Lanka´s competitive 296-6, seemed to be cruising at 242-4 in the 43rd over following a fifth-wicket stand of 121 between skipper Misbah-ul-Haq and Umar Akmal.

But Malinga turned the tables, finishing with five for 52, as Pakistan lost their last six batsmen for 42 runs to be bowled out for 284 in the penultimate over of the day-night match. Akmal hit 74 off 72 balls with seven boundaries and three sixes, and Misbah made 73, but Pakistan were unable to apply the finishing touches as pressure mounted on the lower order batsmen. Sri Lanka´s innings revolved around opener Lahiru Thirimanne´s 102 off 110, his second one-day hundred, and useful contributions from Kumar Sangakkara (67) and skipper Angelo Mathews (55 not out off 50 balls). Sri Lanka were at 204-2 in the 36th over when Pakistan slowed the pace by grabbing four wickets in the space of nine overs. Thirimanne and Sangakkara compiled Sri Lanka´s highest second-wicket stand against Pakistan, adding 161 after Kusal Perera fell in the eighth over for 14. Thirimanne, promoted to open the innings in the absence of the injured Tillakaratne Dilshan, hit 11 fours and a six before he was bowled by Saeed Ajmal in the 36th over. Sangakkara continued the awesome batting form he showed during the preceding bilateral tour of Bangladesh, where he scored 319 and 105 in the second Test in Chittagong, and 128 in the second one-dayer in Dhaka.

The left-hander hit eight boundaries for his 84th one-day half-century when he gifted away his wicket, pulling a short ball from Gul to Ahmed Shehzad at mid-wicket. Sharjeel Khan gave Pakistan a flying start, scoring 26 of the 28-run stand for the first wicket with Shehzad. Shehzad was bowled by debutant left-arm spinner Chaturanga de Silva for 28, and Mohammad Hafeez was leg-before to Mathews for 18 as Pakistan slipped to 83-3 in the 14th over.

It soon became 121-4 as Sohaib Maqsood (17) pulled a short ball from Sachithra Senanayake to de Silva on the mid-wicket fence. But Misbah and Akmal launched a brilliant fightback to raise Pakisan´s hopes, before Malinga stepped in to steer Sri Lanka to victory. India play hosts Bangladesh at the same venue on Wednesday. Afghanistan is the fifth team in the tournament, which decides the regional champion in one-day cricket.