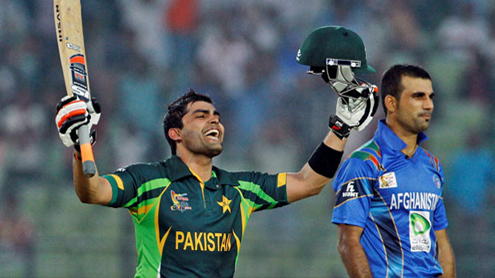 Umar Akmal hit a fighting hundred to help Pakistan overcome early wobbles against Afghanistan to win their crucial Asia Cup match by 72 runs in Dhaka on Thursday. Pakistan owed their recovery to Akmal’s 89-ball 102 not out, which lifted them from a precarious 117-6 to 248-8 in 50 overs before they wrapped up their rivals for 176 in 47.2 overs. Afghanistan, playing their inaugural match in the five-nation tournament, impressed despite the defeat, but their lack of experience stopped them from causing an upset.

Chasing a daunting target, the Afghans were 139-2 in the 36th over before losing their last eight wickets for 37 runs as Mohammad Hafeez (3-29) and Saeed Ajmal (2-25) gave Pakistan a win with a bonus point. Asghar Stanikzai (40) and Nawroz Mangal (35) shared a 74-run partnership for the third wicket but they failed to match the required net run-rate which climbed on them, undoing their run-chase. Shahid Afridi dismissed Stanikzai to break the partnership before Mangal ran himself out to spark a collapse. Noor Ali Zadran had given Afghanistan a solid start with a 63-ball 44 with seven fours, before he fell victim to Umar Akmal dot balls.

Hafeez had Najibullah Zadran (one) and Samiullah Shinwari (14) to complete the win. Earlier, it was Akmal who saved Pakistan’s blushes with a dominating second one-day century, his first in five years. In all he hit seven boundaries and three sixes, helping Pakistan to put on 59 runs in the last five overs. Akmal, let off at 28, led the fightback through a 60-run seventh wicket stand with Anwar Ali (21) to lift Pakistan’s innings. Pakistan began fluently with a stand of 55 between Ahmed Shehzad (50), who hit seven boundaries in his 74-ball innings, and Sharjeel Khan (25).

But once spinner Hamza Hotak (1-22) had provided the breakthrough by dismissing Khan, Afghanistan grabbed six wickets in the space of 62 runs. Hafeez fell for ten, Misbah-ul Haq was run out for nought without facing a ball, Sohaib Maqsood went for 13 and Shahid Afridi for six. Misbah, the world’s highest run scorer in one-day cricket last year, was the dismissal which jolted Pakistan badly. But Akmal held the innings together to ensure Pakistan reached a respectable total. Mirwais Ashraf, Shinwari and Dawlat Zadran took two wickets apiece. India, who beat Bangladesh by six wickets, will face Sri Lanka on Friday. Sri Lanka won the tournament’s opener by 12 runs against Pakistan on Tuesday.  Dwan