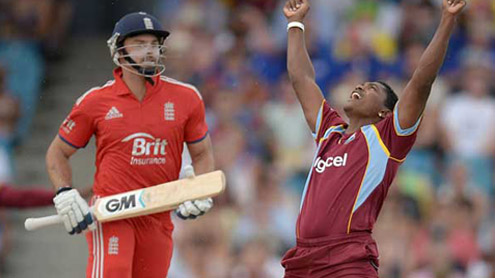 West Indies rallied from a middle-order wobble to romp to a series-clinching five-wicket victory over England in the second Twenty20 International of the three-match series at Kensington Oval in Barbados on Tuesday. Jos Buttler´s career-best 67 saw the tourists´ to a total of 152 for seven batting first with left-arm seamer Krishmar Santokie justifying his inclusion in place of injured spinner Sunil Narine by claiming four for 21 to earn the “Man of the Match” award. Cruising at 111 for two in the 15th over, the hosts lost three wickets for five runs before captain Darren Sammy belted an unbeaten 30 off just nine deliveries to take his team to 155 for five with seven balls to spare. With an unbeatable 2-0 lead going into the final match on Thursday at the same venue, the World T20 title-holders are looking for a strong finish in the Caribbean before heading off to Bangladesh for the defence of their crown. “This is all about building towards the T20 World Cup,” said a delighted Sammy. “It´s good that all the guys are firing and when you sit down and plan, then execute on the field, it feels good.” Handicapped by the absence of regular captain and key bowler Stuart Broad because of injury, England nevertheless proved far more competitive than in the first match on Sunday, although their poor start with the bat and inability to sustain the effort in the field eventually cost them dearly. “I though we were about 15-20 runs short at the end,” stand-in England skipper Eoin Morgan conceded. “We showed a lot of fight though, which is good heading into the World Cup.” England were labouring at 26 for three in the fifth over after Morgan chose to bat first before Buttler joined opening batsman Alex Hales in putting on 76 for the fourth wicket. The wicketkeeper-batsman needed more than a bit of luck but was particularly impressive, hammering five fours and three sixes off 43 balls to put his team in position to post a competitive total. However Hales´ dismissal for 40 just before a rain interruption proved critical in limiting England´s progress on the resumption as Santokie´s clever variations over his final two overs proved extremely effective. “I just try to vary the pace, and it worked on this occasion,” said Santokie. “I just stick to the basics and just seek to improve every time I get the opportunity to play.” In contrast to their opponents, Dwayne Smith (30) and Chris Gayle (36) gave the West Indies a flying start, and although both failed to carry on to the end, their rate of scoring eased the burden on the batsmen who followed. Ravi Bopara´s medium-pace – he conceded just ten runs from four overs for Gayle´s wicket – and James Tredwell´s left-arm spin gave England hope of a fightback while Tim Bresnan´s double-strike in removing Marlon Samuels and Andre Russell off successive balls in the 17th over lifted the prospect of a tight finish. However Sammy, in partnership with Dwayne Bravo, killed off England´s chances and allowed the home fans in another full-house at Kensington to savour the rarity in recent times of a West Indies series victory.  Thenews