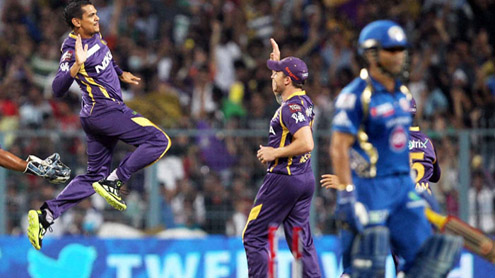 The seventh Indian Premier League (IPL) kicked with an emphatic 41-run win for Kolkata Knight Riders over Mumbai Indians, as the evergreen Jacques Kallis set the tone with a 46-ball 72 before Sunil Narine completed the task with four wickets. Opting to bat, KKR rode on J.Kallis’ 72 and Manish Pandey’s 64 to post a competitive 163 for five, before restricting Mumbai Indians to 122 for seven at the Sheikh Zayed Stadium, with Narine returning match-winning figures of 4/20. KKR’s innings was built on a 131-run second-wicket partnership between Kallis and Pandey. Pace spearhead Lasith Malinga was the pick of Mumbai bowlers, finishing with figures of 4/23. But the Lankan slinger’s effort was not enough, and neither was Ambati Rayudu’s 40-ball 48. After Kallis and Pandey’s exploits with the bat, Morne Morkel and Narine showed KKR the way with the ball.

While Morkel had economical figures of 1/16, with just two runs coming off his first two overs, Narine picked up four for 20. Mumbai were off to a subdued start with Morkel not allowing an inch to free their arms. The tall South African pacer was bowling to such an impeccable line and length that even the experienced Michael Hussey had no answer. The first breakthrough, though, was effected by Narine, who sneaked one through the bat and pad of Hussey. It was a strong comeback by Narine after the Trinidadian’s second ball was deposited into the crowd by Aditya Tare (24). Spin was introduced from both ends early into Mumbai innings.

Jacques Kallis was handed the ball after Mumbai managed only 32 in the first powerplay. Hussey’s departure brought Ambati Rayudu in the middle and giving him company was Tare, who was on the lookout for quick runs. However, with pressure building up, Tare succumbed when he gave a high return catch to Shakib Al Hasan who held on to it after a fumble. There was a partnership of 61 runs for the third wicket between Rohit Sharma and Rayudu. But the two fell in quick succession and after that the task was beyond for even the ever-dangerous Kieron Pollard. Earlier, Pandey struck 64 off 53 balls with the help of six fours and two sixes.

KKR pummelled 73 runs in the last six overs, with 14 coming in the final one, courtesy Suryakumar Yadav. Kallis, who got a reprieve on 34, found the fence five times and cleared it thrice. The start was far from ideal for Knight Riders as they lost skipper Gautam Gambhir for nought in the second over to Malinga. The experienced left-hander had no answer to the Sri Lankan slinger’s yorker that uprooted the stumps. Pandey and Kallis added valuable runs for the second wicket, ensuring there was no further jolt for KKR till the 17th over. Pandey, during his knock, played some effective shots to keep the Mumbai attack at bay, even as Kallis stood steady at the other end preferring to score at around run-a-ball.

While Kallis was looking to steady the ship after the captain’s early dismissal, Pandey launched into IPL debutant Corey Anderson, hitting the New Zealand all-rounder for a six and a four. The tournament’s first six went straight over the bowler’s head as Pandey punished the over-pitched delivery with ease. Spin was introduced after KKR managed just 31 runs in the first powerplay. Mumbai, though, failed to make a breakthrough as KKR reached 63 for one at the halfway stage.

Kallis, meanwhile, upped the tempo by picking Pragyan Ojha for special treatment, smashing 20 runs with the help of two sixes and a four, which also saw the team cross the 100-run mark. The South African then lofted Kieron Pollard on the on-side for another boundary as the Mumbai outfit was getting frustrated. The dropped catch by Malinga off Pollard suddenly assumed significance as Kallis, then batting on 34, opened up after that. A flurry of fours and sixes followed and Kolkata were sitting pretty when they entered the final overs. Malinga, who was brought back for his second spell, knocked over Pandey’s off-stump to give his side a much-needed breakthrough. J.Kallis was declared player of the match mainly for his contribution with the bat.  -Thenews