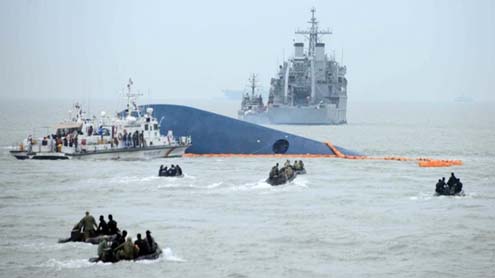 The captain was not at the helm of the South Korean ferry that capsized two days ago, investigators said Friday, as anger spread over stalled rescue efforts for hundreds of missing passengers trapped by the submerged vessel. More than 48 hours after the 6,825-tonne Sewol suddenly listed and then sank, a small of army of more than 500 exhausted divers — battling powerful currents in almost zero visibility — have yet to obtain any access to the ferry´s interior. The confirmed death toll rose overnight to 25, but the focus of concern remained the 271 people still unaccounted for — hundreds of them children on a high school outing to the southern resort island of Jeju.

The newly recovered bodies were all floating in the water, coastguard officials said, as the dive teams worked in shifts to find a way inside the submerged vessel in the increasingly slim hope of finding survivors trapped in air pockets. Unable to secure an entry point for now, they bored holes in the keel — a small section of which was still visible above the water — for oxygen lines.”Two divers are currently injecting oxygen into the ship,” a coastguard official told AFP.

The weather conditions were extremely challenging, with rain, fog and strong sea swells Of the 452 people on board the Sewol when it capsized Wednesday morning, 179 were rescued, but no new survivors have been found since Wednesday. Three giant, floating cranes had arrived at the disaster site, but coastguard officials said they could not begin lifting the multi-layered ferry until they were sure there were no survivors inside. Among the relatives of the missing, especially parents of the 352 students who were on board , there was growing resentment over what they see as the inadequacy of the rescue response. –Thenews