Kim Kardashian’s favourite Celeb IS on the Cover 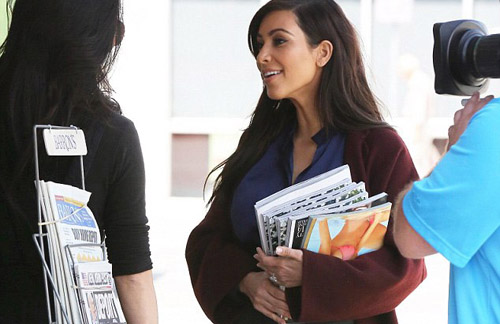 She described her first Vogue cover as ‘a dream come true,’ despite a backlash from fashion fans and loyal readers. And a month on, it seems Kim Kardashian still can’t quite get enough of herself on the front of the style bible.

The 33-year-old reality star and sister Kendall Jenner hit a Los Angeles newsstand on Tuesday to buy souvenir stacks of the magazine. And the Keeping Up With The Kim Kardashians cameras didn’t miss a thing as the curvy star flicked through a slew of other glossy publications. Luckily Kendall was on hand to help carry her haul, and chatted with Kim Kardashians during the shopping trip.

Kim Kardashians looked businesslike in a blue satin blouse and clinging grey pencil skirt teamed with intricate gold high heels. Kim Kardashians appearance came after a disgruntled Vogue writer spoke of his disappointment that his cover story on Kate Upton had been bumped in favour of ‘Kimye’. According to the New York Post, Jonathan Van Meter took to his Facebook page to smugly post a review of the controversial Vogue issue, in which his story is declared ‘the jewel,’ of the April edition.

‘After getting bumped from the cover of April Vogue for Kimye and finding out only once it hit newsstands, I think I have earned the right to post this little bit of frothy praise,’ Mr Van Meter wrote, making a dig at the fact that he was the last to know of the last minute change of cover spot. But Wintour defended her choice and also put an end to rumours that West had been ‘begging’ her to put Kardashian on the cover of Vogue. She wrote in her Editor’s Letter:

‘You may have read that Kanye begged me to put his fiancée on Vogue’s cover. He did nothing of the sort. The gossip might make better reading, but the simple fact of the matter is that it isn’t true.’ Mr Van Meter’s profile on 21-year-old supermodel Kate Upton, which lost the cover story battle, came with an array of tastefully shot photos of the blonde with the famous curves in a series of slim fitting gowns. -Dailymail