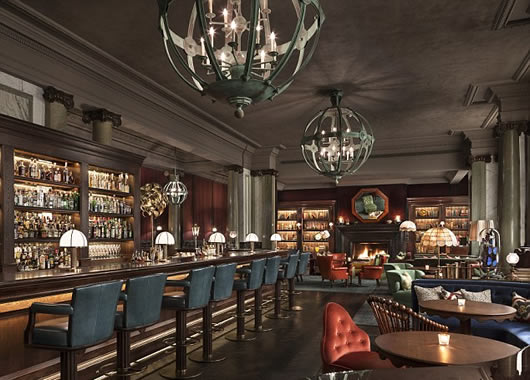 The prestigious Conde Nast Traveler hot list for 2014 spanned 410 cities and 93 countries, looking for resorts that go the extra mile for modern travellers.

Some 510 hotels have been evaluated in seven categories, which included: Beach, Design, Food, Family, Bargain, Over-the-Top, and Way-Out-There Hotels.

The US scooped six hotels in the list, including Ace Hotel in LA being named one of the top five best design hotels of 2014, and The Marlton, New York City, ranked as one of the best bargain hotels on the planet.

Two London hotels managed to impress the judges enough to secure a place on the list – with the The London Edition in Central London listed as one of the five best designed hotels in the world.

The high-end accommodation boasts 173 unique guest rooms and suites featuring oak floors and wood-panelled walls – promising a ‘cosy, cabin-like feel akin to that of a private yacht’. While the Rosewood Hotel, near High Holborn, has been declared one of the top five over-the-top-hotels of 2014.

Opening last year and housed in the original headquarters of the Pearl Assurance Company, the hotel has completed renovated of the 1914 Edwardian, Grade II-listed building. Outside the capital, The Wild Rabbit, set in the heart of the Cotswolds, ranked as one of the top six food hotels in the world.

Launching the 2014 gold list, travel magazine Conde Nast said on its website: ‘Every year, hundreds of great hotels open. ‘We considered 510 this year alone, in 400 cities and 93 countries.

‘The 2014 Hot List is a roundup of our very favorite 33 hotels to debut in the past year. So what are the criteria? ‘A sense of place: a hotel that celebrates where it is in the world. A sense of personality: a hotel where it feels like every decoration has been hand-chosen by a person, not by a committee.

‘A sense of intuition: a hotel where it feels like your needs are considered before you even know what they are. ‘The result is a list that takes you around the world – from Kenya to Los Angeles, St. Petersburg to Phuket – and speaks to the passions and habits of the modern traveler.’

A spokesman for Rosewood Hotel, which boasts 262 rooms, said the building combines ‘English heritage with contemporary sophistication’, and has retained Belle Époque architectural features including the original carriageway entrance to the grand courtyard and a spectacular Pavonazzo marble staircase.

She added: ‘We’d like to think we’ve been included in this prestigious list owing to the many elements of surprise and discovery in the design of Rosewood London. ‘The design is conversational, intriguing and quite unexpected – but it’s essentially modern and metropolitan while still keeping the essence of this heritage building that has graced London for the past century.’

Ukraine Crisis: US troops land in Poland for Exercises