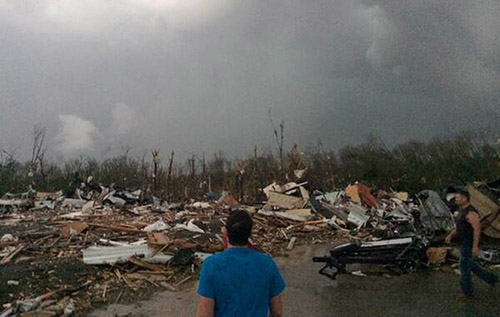 The Arkansas Department of Emergency Management said there were eight storm-related fatalities, while an official with the Oklahoma Emergency Management Agency said there were at least two tornado victims in the state. Local emergency crews were combing through the debris in some of the hardest-hit towns as forecasters warned that more twisters were on their way. “It´s chaos right now,” the mayor of the Arkansas town of Velonia, James Firestone told.  The downtown area “seems like it´s completely levelled. There´s a few buildings partially standing, gas lines spewing.

Fire lines down. We´ve had some casualties.” Firestone said that police and firefighters from nearby cities as well as National Guard troops were heading to his town to help. Pictures of tornado damage posted by Arkansas TV station THV 11 showed overturned cars, homes ripped in half, and houses reduced to piles of debris. The full impact of the storm and its toll will likely not be known until after sunrise. In Oklahoma, a powerful twister struck the town of Quapaw. “There have been numerous homes and buildings damaged and some destroyed,” Keli Cain of the Oklahoma Emergency Management Agency told.

She cited local emergency officials as saying that a fire station was destroyed and there was damage to the northern part of the town. The National Weather Service warned of a severe weather threat, saying there was a “high risk of severe thunderstorms and tornadoes” overnight across much of Arkansas. “It´s been a truly awful night for many families, neighborhoods and communities, but Arkansans always step up to help each other recover,” Arkansas Governor Mike Beebe wrote on Twitter. -thenews