by ToP
in Entertainment, Featured
0 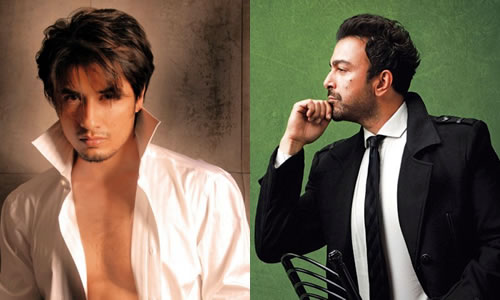 Over the course of time, actor Shaan Shahid has received many film offers from Bollywood and has been equally vocal about refusing them. The most popular of the offers being when he was asked to play the villain in Aamir Khan’s Ghajini (2008).

Recently, at a film awards show, Shaan openly criticised Pakistani artistes who cross the border to be a part of Bollywood ventures, calling them “cheap sell-outs.” At the occasion, where he also unveiled the first look of his upcoming film Arth 2, he blamed local celebrities for making Bollywood a stairway to their success.

It’s unseemly for an artist of shaan’s stature to be critical of others who haven’t chose to walk the same path as him. But the exchange of words between the two well-known actors is a positive sign for the industry.

While the audience, which included stars such as Javed Sheikh and Zeba Bakhtiar, was taken aback by Shaan’s comments, it was singer-actor Ali Zafar who offered him a rebuttal. When Ali went on stage to receive his award for the ‘International Icon of the Year’, he said in his acceptance speech, “Hum doosri cheezon ka sahaara letay hain apni khaamion ko chupane ke liye, patriotism ke naam pae, doosri cheezon ke naam pae…” (We make excuses to hide our weaknesses, sometimes, in the name of patriotism, sometimes, in the name of other things.) “I think we should be honest. Humain sach bolna chahiye aur woh waqt agaya hai ke anay walay logon se sach bola jaaye,” he added. (We should speak the truth and the time has come when the new generation should be told the truth.)

Ali also mentioned how it was disrespectful of Shaan to blame the artistes as sell-outs. He mentioned a list of artistes who have worked in Bollywood, including Bade Ghulam Ali, Nusrat Fateh Ali Khan, Rahat Fateh Ali Khan, Mohsin Khan, Zeba Bakhtiar, Salma Agha, Shafqat Amanat Ali and Atif Aslam. He said that these stars have made their mark in India through their work and have received tremendous appreciation for it.

He encouraged newcomers to not let anything deter them from going where they want to; he gave himself as an example as he was told by many people that he could never make it big internationally. Ali’s words were followed by a huge round of applause, which not only showed that the audience endorsed his point of view, but also that Shaan is not the only driving force behind Pakistani cinema – Ali’s perspective also holds great value in the local film industry. With more than 450 films under his belt, actor Shaan Shahid epitomises the true potential of Pakistani cinema. His dedication to the industry is nothing less than appreciable. In fact, it’s exemplary for other actors, who don’t take Lollywood as seriously as they take other filmdoms.

However, it’s unseemly for an artiste of Shaan’s stature to be critical of others who haven’t chosen to walk the same path as him. But the exchange of words between the two well-known actors is a positive sign for the industry as it shows the polarised perspectives that exist in it. Ali represents the fresh generation of actors who opt for a more holistic, globalised view of things instead of indulging in needless jingoism, which has often resulted in the ban of Indian films in Pakistan. It’s time that the film industry takes up a more progressive approach towards international collaborations, which many young actors advocate. As Allama Iqbal says, “Jawanon ko Peeron ka ustad kar.” (Make the young mentors of the old.) –tribune