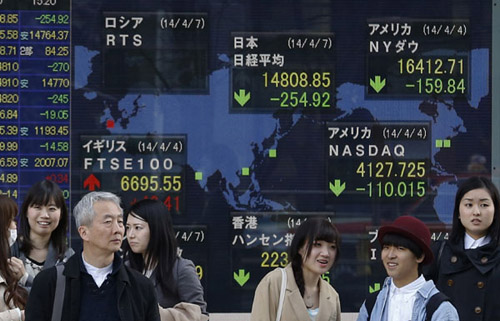 Asian markets were mostly lower on Monday as a positive lead from Wall Street was trumped by fears over the growing crisis in Iraq that has sent oil prices to nine-month highs. The uncertainty fuelled by the insurgency that has seized a swathe of Iraq sent traders into safer assets, with the yen ticking higher against the dollar and the euro while gold also rose.

Tokyo fell 0.65 percent, Hong Kong was 0.13 percent lower, Sydney slipped 0.27 percent and Seoul was 0.12 percent down. However, Shanghai was 0.14 percent higher following another batch of upbeat economic data last week. Investors are nervously tracking events in Iraq as militants sweep though the country, taking over key cities and moving towards Baghdad as US-trained Iraqi government forces crumble. US President Barack Obama raised the prospect of possible air strikes on the militia, saying his national security team “is looking at all the options” but while an aircraft carrier group has been deployed to the Gulf, he has ruled out any return of combat troops.

Washington is also preparing to hold talks with Iran to try to resolve the crisis, a report said, as the US condemned Sunday a “horrifying” massacre by militants of hundreds of Iraqi soldiers. On Wall Street the Dow rose 0.25 percent, the S&P 500 added 0.31 percent and the Nasdaq put on 0.30 percent. However, the indexes were all lower over the week. Oil prices headed higher owing to concerns about supplies from Iraq, a key exporter. In early trade US benchmark West Texas Intermediate rose 47 cents to $107.38 while Brent crude was unchanged at $113.50.

And in foreign exchange trade the dollar sank to 101.87 yen from 102.04 yen in New York Friday, while the euro was at 137.91 yen against 138.16 yen. The single currency was also at $1.3535 compared with $1.3538. While attention turns to events in the Gulf, traders will be paying close attention to a US Federal Reserve meeting that concludes on Wednesday, looking for a fresh handle on the world´s number-two economy. The price of gold, a safe haven commodity, switched upwards, fetching $1,281.25 an ounce at 0145 GMT compared with $1,272.04 late Friday. -thenews