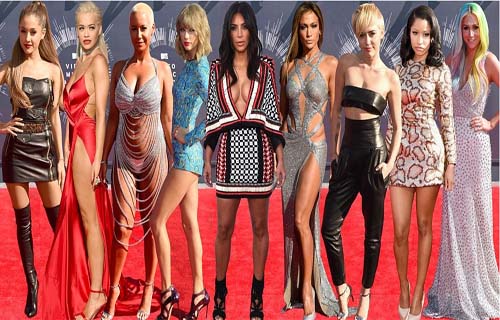 Miley Cyrus won the award for Video of the Year for her hit single “Wrecking Ball,” at the 2014 MTV Video Music Awards outside Los Angeles. The singer beat out Beyonce and her husband JayZ, nominated for “Drunk in Love,” as well as Iggy Azalea featuring Charli XCV for “Fancy,” and Pharrell Williams for “Happy,” and Sia for “Chandelier.”

But Beyonce shined as she closed the show, showing off her vocal power in front of a special audience member — her daughter, Blue Ivy. Cyrus, who sparked a furor at last year’s MTV awards show with her controversial “twerking” on stage, avoided scandal this year.

Rapper Drake won Best Hip-Hop Video for “Hold On (We’re Going Home),” which had also been contested by Canadian duo Majid Jordan. Princess of pop Katy Perry won the trophy for Best Female Video with her song “Dark Horse,” featuring rapper Juicy J. The men’s category was won by Ed Sheeran, 23, for his “Sing,” a duet which he recorded with Williams. Best Pop Video went to the young Ariana Grande, the latest pop sensation, for the song “Problem,” which also features Iggy Azalea.

And New Zealand singer-songwriter Lorde took home Best Rock Video for “Royals,” a song that, in January, won her the Grammy for Song of the Year and Best Pop Single. The first MTV awards were handed out in 1984. Winners receive a statuette of an astronaut on the moon, known as a “Moonman” award.

Younus Khan to Return From Sri Lanka After Nephew’s Death

Younus Khan to Return From Sri Lanka After Nephew's Death