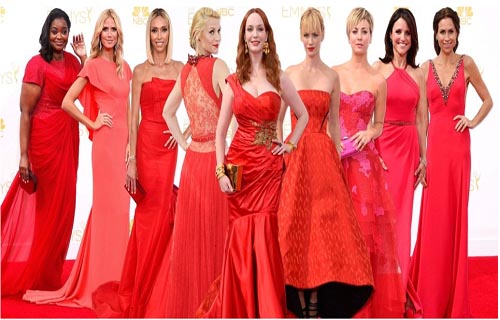 Hollywood’s leading ladies were in the mood to paint the town red at the 66th Annual Emmy Awards in Los Angeles on Monday. Scarlet frocks proved to be the most popular look of the night, with Heidi Klum, Julia Louis-Dreyfus, Claire Danes among the many leading ladies dressed in rouge. Mad Men stars Christina Hendricks and January Jones stole the show in their stunning eye-catching ensembles.

Christina looked beautiful in a Marchesa red satin gown with gold detailing at the waist, while her co-star January Jones sported a dramatic Prabal Gurung gown with her blonde hair teased in a chic updo. Claire Danes joined the scarlet dressed ladies in a stunning Givenchy lace gown with sheer back and sides while Kaley arrived on the arm of her husband Ryan Sweeting who looked dapper in a bright blue suit and bow tie. The svelte Big Bang Theory Star said she prepared for the big show by tucking into a McDonalds, posting a snapshot of herself on Instagram. Modern Family star Sarah Hyland continued the red theme in a flowing floor-length skirt and a white crop top, while Heidi Klum sported a coral Zac Posen dress and wavy hair.

Almost disappearing into the carpet was Giuliana Rancic – one of the first stars to arrive at the Nokia Theatre in Los Angeles – and one who set the trend in full-length fiery ensembles. Meanwhile, Kerry Washington also plumped for eye-catching look, sporting an orange strapless Prada number with a black sequinned detail and co-ordinated clutch. I saw it hanging there and I knew it was a contender,’ the actress said about the dress. ‘I threw it on during a lunch break when I was shooting Scandal and fell in love.’ Zooey Deschanel, famous for her love of vintage styles, stepped out in a rather modern looking bright pink Oscar De La Renta gown with her brunette hair worn in loose curls. Halle Berry was a late arrival to the party, arriving on the carpet in a silky lilac gown and coordinated shoes, before taking the stage to present an award. Sofia Vergara went for a lighter look, plumping for a strapless white Roberto Cavalli gown, although she was without her new boyfriend Joe Manganiello.

‘He’s really hot, that’s why I didn’t bring him. He’s too hot, he’s too tall, he takes up a lot of space,’ she told E! News on the red carpet. ‘He’s too sexy!’ She added: ‘We’re having a lot of fun. He’s a really funny guy, which is something that’s really important to me, and a really nice guy.’ Matthew McConaughey did ensure he brought his glamorous wife Camila Alves along for the bash and the couple looked ultra stylish as they posed on the carpe with Camila sporting a mosaic style Zuhair Murad gown. The Oscar-winning star was hoping to round off his 2014 awards haul with an Emmy win for HBO series True Detective. The Dallas Buyers Club was a wonderful experience and then I went straight on to do True Detective, another great character,’ he told E! on the red carpet. ‘But look at the five guys I’m in the category with. There are some heavyweight performances. There’s a lot of people that deserve it if they win. ‘

Pregnant Nashville star Hayden Panettiere showed off her burgeoning baby bump in a gorgeous sequinned outfit by Lorena Sarbu. Hayden is expecting her first child with fiancé Wladimir Klitschko, and revealed the couple are expecting a baby girl. ‘I can’t wait for her to come out, this little one,’ she told E! ‘I like to shop, girl! I want to go shopping for my girl. I want to paint the room appropriately.’ The star said she and her Ukranian-born boyfriend will choose an appropriate name to reflect both their heritages. ‘We have to make sure that it is American and Ukrainian all at the same time,’ she said. ‘That’s a little rough…we’re still working on it.’

In a carpet full of bright reds, classic white ensembles and hot metals, some of the stars still stuck to classic little black dresses and darker ensembles, including Julia Roberts – nominated for A Normal Heart- who wore Elie Saab Haute Couture. There was method behind her choice of a knee-length number. She told E! ‘It’s nerve-racking to wear long. There’s the tripping factor.’ And the actress said she would be saving the dress for when her ten-year-old daughter Hazel is old enough. ‘I’ll just pack it up for my daughter when she’s tall enough to wear it. That’s the whole point, isn’t it?’ she laughed. Anna Chlumsky, Lucy Liu, Kate Mara and Alison Williams also all stuck to pale looks while Robin Wright.

Who was nominated for her role as icy First Lady Clare Underwood in House Of Cards, made one of the evening’s boldest choices in a backless Ralph Lauren jumpsuit. The ladies of acclaimed Netflix show Orange Is The New Black all showed off their glamorous sides ditching their regulation prison jumpsuits familiar to fans of the dramedy series. Emmys host Seth Meyers also turned up with his wife Alexi Ashe and the late night host smooched his wife of a year who looked stunning in teal. And newlyweds Adam Levine and Behati Prinsloo completed their weekend of awards – with Levine’s band Maroon 5 performing at Sunday’s MTV Video Music Awards. The couple made for an attractive pair, with model Behati sporting a black Prada number with sheer sleeves and neckline.