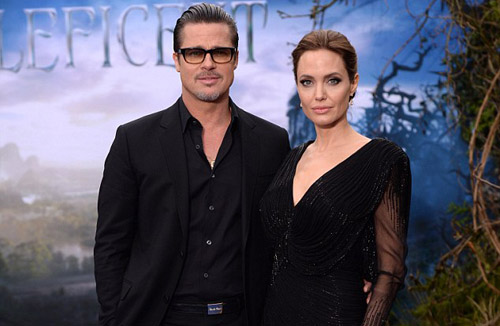 Brad Pitt and Angelina Jolie tied the knot in an intimate ceremony at a small chapel on the grounds of Chateau Mirval, France, a spokesperson confirmed today. Watched on by only 22 people, including their brood of six children, Brad, 50, and Angelina, 39, said I Do on Saturday. The actress walked down the aisle in a white dress which was ‘very traditional, but very Angie, it was comfortable but plain white floor-length antique lace and silk.’ And a source today told Mail Online how the couple decided to marry at the stunning estate they bought in 2011 after Angelina Jolie made a promise to wed in France to her mother – and also to commemorate the 10-year anniversary of the filming of Mr & Mrs Smith, where they met and fell in love. While the designer of Angelina’s gown is still unknown, the website claims the star ‘definitely wore something that once belonged to [her late mother] Marcheline Bertrand. ‘It was a small locket with a photo of her mother inside it. She had a veil and Brad gasped when he lifted it because she looked so stunning.’ Jolie walked down the aisle with her eldest sons Maddox, 13, and Pax, 10, on each arm. Her daughters Zahara, nine, and Vivienne, six, threw petals, and Shiloh, eight, and Knox, six, served as ring bearers. Brad’s parents, Bill and Jane Pitt, were in attendance, according to the site, along with the groom’s brother, Doug Pitt, sister Julie Pitt and her two children. The judge who married the couple was also at the civil ceremony, which reportedly had in total 22 guests, the majority made up of Brad Pitt family. Angelina’s father, the actor Jon Voight, was unaware of his daughter’s wedding plans, telling Inside Edition that he didn’t know she had married. ‘That’s nice’, was his only comment. Today, Voight, 75, told E! in a statement: ‘It sounds like it was a wonderful wedding. It must have been very beautiful with the kids participating. I know it was during Emmy weeks and they were able to do it very quietly. I’m very happy for them.’ After a short family honeymoon in Nice, the Jolie-Pitts headed to Malta on Wednesday to start shooting By The Sea, a film written and directed by the Oscar-winning actress, and the second in which they both star. While details of the plotline are being kept under wraps, The Hollywood Reporter claims that the long-time lovers will play husband and wife in the flick, which is set to be released sometime in 2016. It is the second marriage for Pitt, who was with first wife Jennifer Aniston for five years; and the third for Jolie, having previously been married to Jonny Lee Miller and Billy Bob Thornton. Already, Pitt’s pal and Ocean’s Eleven co-star George Clooney has shared his congratulations, telling Entertainment Tonight: ‘How great is that?!! I’m really happy for Brad and Angie and their whole family.’ Of course plenty of other stars were sharing their well wishes to the power couple on Twitter. ‘Congratulations Angie & Brad!!!’ Mia Farrow wrote alongside a picture of the pair. ‘Now let’s work for the day when everyone can get married. Pat O’Brien shared: ‘Congrats to Brad and Angelina. Two of the nicest people in Hollywood.’ Comedian Sandra Bernhard managed to get in a little dig, but still revealed she was thrilled for the couple. Although they both lied to me on separate occasions i congratulate both and i’ll never forget our special time together,’ she wrote. And, because it’s Twitter, some celebrities decided to poke fun at the news. But we are discussing it with the children and how they imagine it might be. Which is verging on hysterical, how kids envision a wedding,’ the Mr And Mrs Smith star said. They will in a way be the wedding planners. It’s going to be Disney or paintball – one or the other! She added: ‘We’ve got a lot of different personalities in the house. They’ve got some strong opinions. It will be fun. That’s the important thing. When we do it, it will feel like a great day for our family.  At her 1996 wedding ceremony to Jonny, she wore black rubber jeans and a white T-shirt on which she had scrawled his name in her own blood. The marriage lasted a year-and-a-half, ending amid reports of her infidelity. She behaved in a similarly crazy manner with her next husband Billy Bob who she enjoyed a two-month courtship with after he ended his engagement to fellow actress Laura Dern. Just days before the wedding, Angelina was admitted to a psychiatric ward for 72 hours after nearly having a breakdown. Clearly having a thing for life essence, Jolie and Thornton wore vials of each other’s blood around their necks and bought adjoining lots in a graveyard. ‘It’s just constant and I’m like ”Look I don’t know,” Jen, 45, who is engaged to actor Justin Theroux, explained. ‘I don’t have this sort of check list of things that have to be done. ‘And if they are not checked, then I’ve failed some part of my feminism or my being a woman or my value or my worth as a woman because I haven’t, you know, birthed a child? She added: ‘I’ve birthed a lot of things and I feel like I’ve mothered many things and I don’t think it is fair to put that kind of pressure on people.’ -dailymail