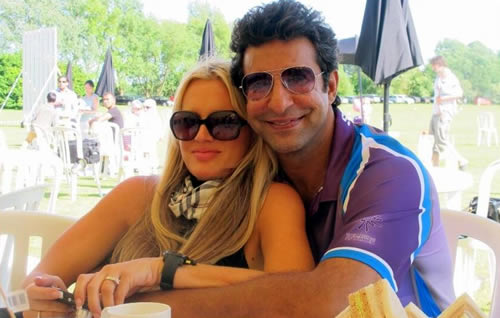 Wasim Akram married Shaniera in a hush-hush ceremony last year. And that was because it was a second marriage for Wasim Akram. But now we get to know about the proverbial ‘good news’.

Yipee!! Former Pakistan fast bowler Wasim Akram and Shaniera Akram are reportedly expecting their first baby together. According to reports, Mrs. Wasim is currently in the fourth month of her pregnancy. And the couple is very excited at the prospect of starting a family. Wasim, who is the father of two lovely sons from his previous marriage, is looking forward to having one more baby.

Wasim Akram and Shaniera Akram tied the knot in August last year and have been living in Karachi with Wasim’s sons from his first wife who died due to organ failure in 2009. Wasim Akram was part of the Pakistan cricket team who won the ICC world cricket cup in 1992.

Friends of the couple talk about Shaniera who has been a great strength and moral support to Wasim, “Right now Wasim and Shaniera are ecstatic about the fact that they will be having a baby.

Shaniera is over the moon. For the couple it doesn’t matter what gender the baby is, as long as it’s a healthy one.”

We at timesofpakistan.pk wish the to-be-parents all the very best!