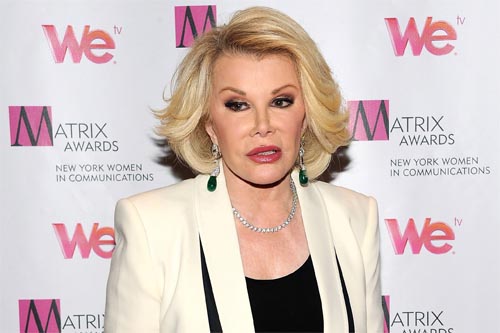 Joan Rivers’ funeral will take place in New York this weekend. The 81-year-old comedienne, who passed away yesterday following surgical complications, will be laid to rest at Temple Emanu-El in Manhattan on Sunday Us Weekly has confirmed.

Elizabeth Fezrine, a spokeswoman for the congregation, said details about the service – including the time and whether the public will be allowed to attend – are not yet known. Joan’s daughter Melissa announced last night her mother had died at lunch time following a week on life support at Mount Sinai hospital in New York. Joan had been rushed via ambulance to the medical centre after she suffered a cardiac and respiratory arrest while undergoing a routine operation on her vocal cords at Yorkville Endoscopy clinic last Thursday.

The ‘Fashion Police’ host was placed in a medically-induced coma after the health scare, but showed signs of improvement on Wednesday when she was moved out of intensive care and into a private room at the hospital. Yorkville Endoscopy clinic is now being investigated by the New York State Department of Health, spokesman James O’Hara told CNN. Meanwhile, Melissa, 46 – Joan’s only child – has thanked fans for their continuous love and support. She said in a statement: “Cooper [my son] and I have found ourselves humbled by the outpouring of love, support, and prayers we have received from around the world. They have been heard and appreciated.” -femalefirst