“Lollywood is over. It’s time for Kollywood: Javed Sheikh 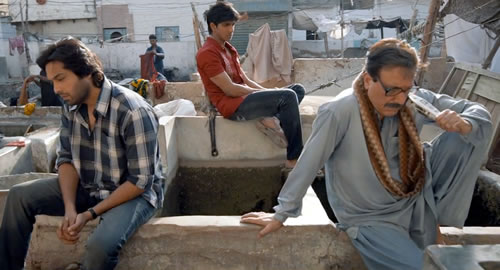 Javed Sheikh is excited about the new breed of filmmakers as he discusses Na Maloom Afraad, the future of cinema and more importantly, trashes any notion of banning Bollywood films.

Interviewing a veteran like Javed Sheikh is no easy feat. You would assume him to have an unpredictable personality, having remained at the helm of an equally volatile industry for decades. But as he enters his tastefully decorated drawing room dressed in a simple buttoned-down cotton shirt and white trousers (giving one a feel of timeless sophistication), you get a drift of his modesty, his gentle demeanor and how much he abhors pretentiousness.

Almost six decades into life, Sheikh is still full of drive and energy. As he speaks one can instantly sense the level of experience diffuse into the surroundings. His mannerisms are the stuff of legend but his true expertise lies in his acting talent. Every now and then he manages to surprise audiences with a performance that blurs the line between reality and fiction – be it back in the day with the cupid-stricken Faraz in iconic TV serial Ankahi or more recently, the cricket world’s don in Jannat. Continuing his own legacy, he has once again picked up a challenging role in Na Maloom Afraad, one that promises to reinforce his versatility as an actor.

“It’s very different from what I have done in any of my films till date,” says Sheikh. “He (my character) is basically this serious old person who is forced into a situation that will make the audience burst into laughter. Another feature of my character in the film is that he stammers – something I haven’t done so far, except once in Anwar Maqsood’s drama called Shauhar Jamoora which was right in the beginning of my career.”

The birth of his career dates back almost four decades and the past one decade has seen a gradual diffusion into small, character roles in Bollywood. Sheikh still feels he is making a space for himself and doesn’t mind what critics have defined as ‘trivial’ roles. “If Amitabh Bachchan can do a mere two scenes in The Great Gatsby to delve into Hollywood then I can surely do a Jaan-e-mann to make room for myself in Bollywood,” he remarked defensively.

“Everything in life takes time,” he added, to bring everything to ease. “It is the beginning for me in Bollywood. They are still unaware of my potential and my capacity as an actor and just when things were getting better the Mumbai attacks happened and I had to return. But I am starting anew once again and I have a couple of big films in the pipeline. I was even going to be in SRK’s Happy New Year but I couldn’t do it because of work commitments here in Pakistan. It’s not that they deliberately sideline you but just that as you prove your mettle, they will offer better opportunities.”

Sheikh is not only one of those who dared to cross over but is also among the rare breed of Lollywood veterans who don’t shy away from supporting Bollywood invasion. While many of our actors and filmmakers have openly voiced their resentment over the showcase of Indian cinema in Pakistan, Sheikh believes that Bollywood films have done nothing but given life to the dying business of cinemas.

“If Bollywood films weren’t allowed to screen, we wouldn’t have had all these upscale multiplexes like Atrium and Nueplex that we all thrive on now for entertainment,” he commented.  “Our aim should be to make films that can compete directly with Indian cinema. Last year when Waar and Main Hoon Shahid Afridi released, there were Indian films being shown as well yet people came to watch our movies. So it is the content that matters more than the competition.”

As far as Pakistani content is concerned, Sheikh feels we have finally moved beyond the old-fashioned, corny concept of “a daku, a badmaash and a tawaif”. “Lollywood is now over because the people behind it never really bothered to move ahead with time. It’s time for ‘Kollywood’ – a new, modern cinema that has emerged from Karachi with young and creative minds on board,” he suggested. “Their subjects are different and diverse and there is a lot of planning involved. If it continues this way, Pakistani cinema will definitely become a force to reckon with in a few years, just like our television industry already is.”

“In fact our dramas are a great benchmark to refer to,” he continued, giving a series of anecdotes. “The other day I texted Rishi Kapoor to wish him on his birthday and he replied saying thank you and that he is enjoying watching me on Zindagi TV. Pick up any recent interview from Bollywood and you’ll read how they feel about our dramas, saying they are much better than their own films. All these big stars are now sitting in front of their TV screens to watch Pakistani dramas. So if we can make great television, we can surely make great cinema too.”

The young and innovative talent behind Pakistan’s nascent new-age cinema sure does look promising but does he feel that fame is coming too soon and too easy for the new generation of actors? Is it leading to misplaced pride, narcissism and often no respect for the older generation, as accused by Badar Khalil in one of her interviews?

“Of course,” he immediately agrees. “They (young actors) are unprofessional, full of themselves and too engrossed in their cellphones to even remember the dialogues. That is exactly why they fizzle out faster than they become famous. It’s easy to become a star because you have done a hit film or two but harder to maintain that title. You have to have an ethical, professional and positive attitude not just towards your work but also towards the people you are working with. You shouldn’t backbite, cancel shootings unnecessarily or think yourself to be above your seniors.” Apart from work, he is dealing with two coming-of-age children of his own at home – his daughter Moomal who is a morning show host and a son Shahzad whom he plans to take to Bollywood with him for a brighter future. For now, his own country takes front seat as he is planning to direct two films, one with youngsters like Shehroz Sabzwari and Shahzad from his own growing family tree.

As we end our informative and reflective conversation with Javed Sheikh, he leaves us a touch more enlightened, shedding light on the business of cinema and the complex game of distributors.

“While a powerful script is the foremost requirement to attract your audience, young producers need to be more intelligent about release dates,” he puts in. “Pakistan has only a handful of big distributors who have a control over cinema slots, simply because they have the money to invest in it. So for instance if there are two big films releasing on a particular date already including an Indian one, give your film some leverage and release it a week later. This is what happened with Sultanat. Even though Kick was released a week before Eid, it already had the most lucrative show timings for Eid and hence, Sultanat suffered.”

Reflecting on his suggestion, we wonder how the release of Bang Bang and Haider will affect the commercial success of Operation 021 and Na Maloom Afraad, after all there are only so many 3-hour slots in one day. Nevertheless, the trailer looks interesting and alongside Javed Sheikh, Fahad Mustafa has also garnered enough fanfare thanks to his recent Ramzan show and that may prove enough to lure viewers and mint some money. – tns.thenews

Hashmi to Contest by-Polls as Independent

Hashmi to Contest by-Polls as Independent