10 Most Difficult Sports in the World 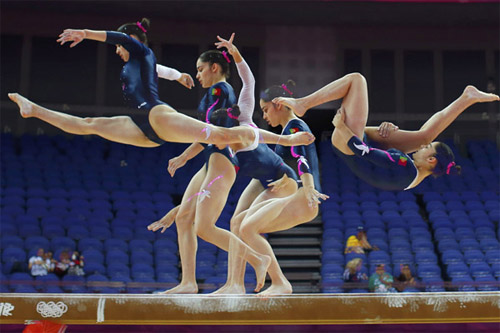 Sports can be hard? Yes they can be rather they are. Many sports which seem easy to play are, in actual, the hardest ones.

Here we bring to you an article that will reveal to you the Top 10 Most Difficult Sports in the World. So, come, take a sneak peak and enjoy browsing!!

Cross Country Sports are inclusive of many types sports out of which cross country running is one. It comes under the umbrella of athletics, and is actually road running. In this all age groups of people, both males and females, take part and they cover a long distance over rough terrain. The participants run a typical distance of 4-12 kilometers and the path could be earthed or a rough terrain. It is at number 10 on our list.

Freestyle wrestling is another sport counted among the hardest sports. It is a style of amateur wrestling and is one of the two wrestling styles contested in Olympic Games. Freestyle, also referred to as collegiate wrestling, allows the use of the wrestler’s or his opponent’s legs in offense and defense. It is the most complete style of standup wrestling that brings together traditional wrestling, judo, and sambo techniques.

Horseback riding, commonly known as horse riding is the art of riding, driving or steeplechasing with horses. It is a highly competitive sport that requires much skills and techniques. Horse riding, which is actually horse racing, is widely popular worldwide. It has got its roots from ancient times. This is a tough game to play and one needs to have good command over his galloping style. The sport is, thus, at number 8 on our list.

Bull riding is a sport that involves a rider getting on a large bull and tries to keep himself stable irrespective of the attempts made by the bull to mount him off. The sport is referred to as rodeo sport and demands vigilance on part of the rider. The rider fastens himself tightly and must stop bucking bull for eight seconds. It is really difficult to keep oneself intact, and is very risky to play. It is also called as “the most dangerous eight seconds in sports”. [contentblock id=2 img=adsense.png]

Water Polo is another hard to play sport and is at number 6 on our list. It is a team water sport in which the two teams throw the ball on the oppositions to score the goal. Each team consists of 6 players and one the most goals wins the game. Water Polo is a tough game played in 1.8 m deep water pool where goalkeeper in addition to which are also the substitute players. The game consists of 4 quarters and the team scoring much stamina is required of the players.

Motor Cross is yet another one on our list and is ranked at number 4. It is a form of motorcycle racing that is held on enclosed off-roads. It is a sport that is held in all weather conditions that demands much physical strength.

It first got evolved in United Kingdom from motorcycles trials competition and is a sport where delicate balancing is required.

Skiing is a competitive rather recreational sport in which participants attach skis to boots on the feet and bring them to use to travel on top of snow. Other than it being a recreational sport, it has been used for military purposes that portrays it a tough game. It is, thus, at number 3 on our list.

Swimming is another game played in water and is at ranked number 2 on our list. It is a type of sport which also demands much stamina and physical strength on part of the participants. Staying underwater and flapping one’s legs and arms is a difficult task, and only those with good skills can achieve the target.

Gymnastics, the hardest sport in the world is ranked at number 1 on our list. Likewise the practices, its conditioning is really hard. You need to be flexible, strong and must possess good balance to have a good command over the sport. Most importantly you need to take good care of yourself while playing as it may rip your hands, your body. -sporteology