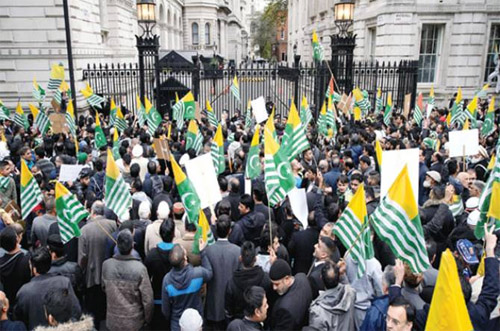 Thousands of people attended a Million March for Kashmir’s right of self-determination in London on Sunday to show solidarity with the people of Indian- occupied state in their decades-long struggle.

A large number of people supporting the Kashmir cause came out on the streets of London to draw world attention to the Kashmiris’ troubles who have suffered a lot at the hands of Indian occupation forces in their quest for freedom.

Thousands of Kashmiri people have been killed in decades of Indian brutality. Many people had travelled from several other cities in Britain for the event marked by placards with anti-India slogans. The participants numbering thousands chanted slogans like ‘Kashmir bane ga Pakistan’, ‘We want Freedom’ and ‘Go India Go’. The March, which was also a protest against human rights violations by Indian troops in the Occupied Kashmir, started from London’s Trafalgar Square and concluded at 10 Downing Street – the official residence of British Prime Minister David Cameron. Towards the end of the March, the protesters submitted a memorandum to the British government seeking an early resolution to the Kashmir dispute in accordance with the aspirations of people of Kashmir.

Though billed as a ‘Million March’, the strength of the rally was nowhere near that mark. Unfortunately, Pakistan’s internal political divisions overshadowed the event as before start of the march, an angry section of the crowd pelted Pakistan People’s Party Chairman Bilawal Bhutto with plastic bottles, shoes and cans as soon as he came on the dais to address the gathering at the Trafalgar Square. Angry that Bhutto was allegedly using the event as his political launch pad, the angry mob shouted slogans against him and his father Asif Ali Zardari, and attacked him, prompting the London police to whisk him away from the dais at Trafalgar Square.

The attackers were alleged to be supporters of Imran Khan’s Pakistan Tehrik-i-Insaf. Slogans against Pakistan Prime Minister Nawaz Sharif were also heard. The attack on Bhutto soon led to a separate hashtag BhagBilloBhag, as people tweeted their joy at his retreat as well as anger at the event being politicised. In a message on micro-blogging website twitter, Assefa Bhutto Zardari, who accompanied Bilawal, posted that “Indian agents tried 2 stop my brother from speaking but Alhamdulillah they did NOT succeed. He completed his speech& Alhamdulillah he is safe.”
PPP AJK president Barrister Sultan Mehmood, who organised this March, prominent leaders from Azad and Indian-held Kashmir, and a number of British Parliamentarians were also present on the stage on that occasion. Member UK Parliament and British House of Commons Kashmir Committee President Andrew Griffiths also addressed the gathering.

Barrister Sultan Mehmood, who is also a former prime minister of Azad Kashmir, in his address said, this is a first event of its kind. “We have gathered here to express solidarity with the people of Kashmir and to divert attention of the international community towards Kashmir issue.” Sultan said the Indian aggression will have to end one day. He said this struggle would continue till the end of Indian occupation of Jammu and Kashmir. He said he salutes the brave Kashmiri people who have been facing the terrorism of Indian troops for so long.

In a statement, Hurriyat leader Syed Ali Shah Geelani declared London Million March a much needed step. He said it is to give world a message that terrorism has no direct or indirect link to the Kashmir Liberation Movement and the people of Kashmir were struggling for their genuine right. Some unconfirmed reports suggested that India had asked the United Kingdom not to allow this march in London but the British government refused the request.