CIA Jet Crashed With 4 Tons Of Cocaine On Board 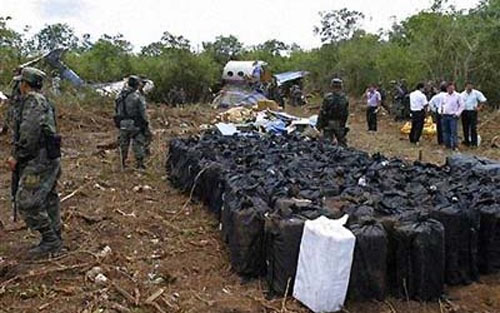 4 tons of cocaine on board

A Gulfstream II jet, aircraft # N987SA, allegedly used to transport Central Intelligence Agency (CIA) rendition prisoners from Europe and America to Guantanamo Bay, Cuba crash-landed Sept. 24, 2007 in Mexico carrying a cargo of over four tons of cocaine. It is suspected the Gulfstream jet ran out of fuel as it traveled from Colombia to the United States.

was a front for Immigration and Customs Enforcement (ICE). ICE claims it sold the aircraft to Drug Enforcement Agency (DEA)-suspected drug smugglers as part of an undercover operation immediately prior to the crash in Mexico.

According to an affidavit accidentally unsealed then subsequently resealed, Whittington is currently under investigation for using a Colorado Springs resort and spa to launder profits from the sale of this and other aircraft used in smuggling busts. -anonhq