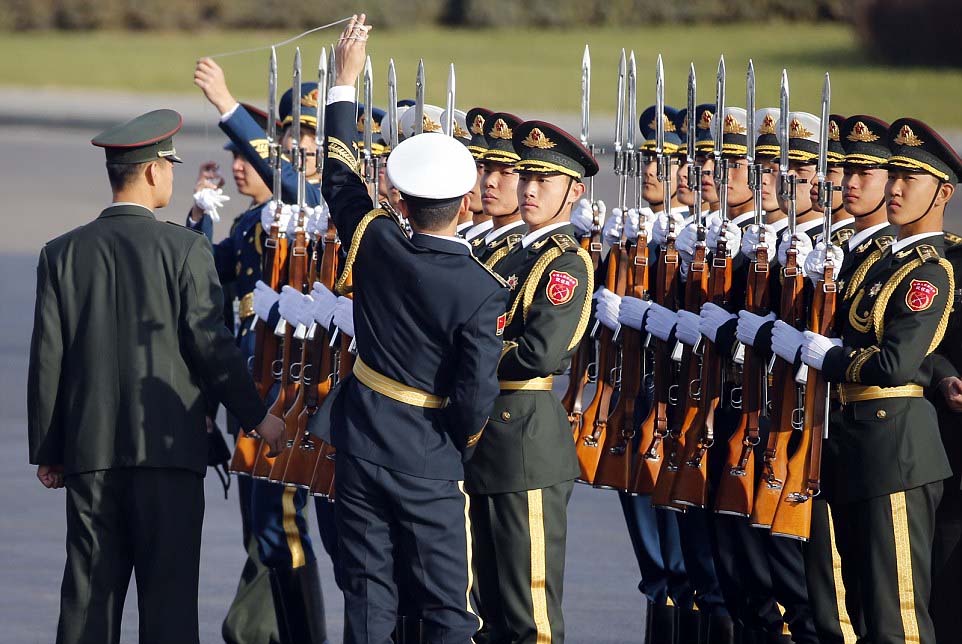 Before President Obama got off the plane in Beijing on Monday, Chinese military officials directed an honor guard to fall in line – literally. Two men were photographed holding a string in front of the guardsmen, to see if they were standing together in a perfectly straight line. Obama traveled to China in order to attend the Asia-Pacific Economic Cooperation (APEC) Summit. With his influence at home quickly fading, President Barack Obama is looking east to China, the opening stop of a three-country tour that will test his ability to play a commanding role on the world stage during his final two years in office. This isn’t the first time string tests have been employed before welcoming ceremonies: Reuters has snapped guards being subject to the tests multiple times, including before the arrivals of Truong Tan Sang – the president of Vietnam – in June 2013, Uhuru Kenyatta – the president of Kenya – in August 2013, and Angela Merkel – the Chancellor of Germany – in August 2014. Once treated like a global superstar, Obama arrived Monday in Beijing under far different circumstances, with his most powerful days behind him. At home, Republicans are still rejoicing at having pummeled Obama’s political party in the midterm elections, relegating Democrats to the minority in both chambers of Congress. His counterparts in Asia surely have noticed. [contentblock id=2 img=gcb.png]  Upon his arrival in the Chinese capital, Obama stepped off Air Force One and onto a red carpet, where the honor guard lined his path to a waiting limousine. First up was a sit-down with President Joko Widodo of Indonesia, where Obama lived as a child. Widodo, who was sworn in last month amid high hopes for progressive leadership, said his election showed Islam and democracy can go together, and pledged to keep fighting extremism in his country. Obama was effusive, calling his election an ‘affirmation of the full transition Indonesia has made to a thriving democracy and a model for the kind of tolerance and pluralism that we want to see all around the world.’ Obama suggested Widodo might even visit Washington next year. Reviving a phrase from his youth, Obama thanked the assembled reporters in Bahasa Indonesia, the country’s official language. Later Monday, Obama was to give a speech Monday about U.S. ties to Asia at a high-level Asia-Pacific Economic Cooperation summit, then join key Asian leaders for dinner and fireworks at the Beijing National Aquatics Center. During his three days in China, Obama will also meet with Chinese President Xi Jinping. The leaders of the world’s two largest economies will address reporters before the state visit draws to a close Wednesday and Obama flies to Myanmar. The trip marks one of Obama’s final opportunities to deliver on his goal to amplify U.S. influence in Asia. In China, Myanmar and Australia, leaders will be rendering judgment on whether Obama’s lofty ambitions in Asia-Pacific have been sidetracked by festering crises in Eastern Europe, Africa and the Middle East. ‘

This is going to be a tough trip for the president,’ said Ernest Bower, an Asia expert at the Center for Strategic and International Studies in Washington. He said Asian leaders were viewing Obama’s trip with a key question in mind: Who is Barack Obama after the midterm elections? They’ll be trying to discern whether he has the commitment and political capital to follow through,’ Bower said. Even before the election, Obama’s commitment to the region and his ability to boost U.S. clout there was in doubt in many capitals. U.S. allies such as Japan and South Korea have pressed for a greater American presence, partly to counter China’s growing influence. Yet Obama’s mission against the Islamic State group and his government’s Ebola response have diverted U.S. military and financial resources elsewhere. The president remains deeply committed to his Asia rebalancing strategy, and its implementation will remain a top priority throughout the second term,’ said Obama’s national security adviser, Susan Rice. -dailymail