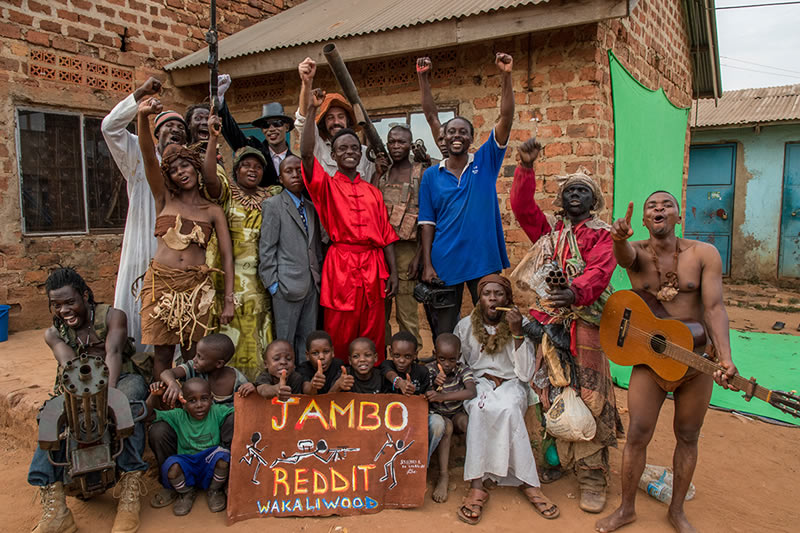 It s a searing hot day, and a group of commandos are attempting a daring prison break. “Stop, get them!” General Placdo, a drunkard and an invincible Kung Fu master in khaki fatigues, shouts in the local Luganda language. “You will never succeed, we will destroy the world! You will see!” screams a recurring villain in a black balaclava, who is the leader of the Tiger Mafia, before a fistfight ensues. This is no real-life jailbreak, rather a scene from “Operation Kakongoliro” (“Ugandan Expendables”), an action film due for release later this year. It is being filmed in a scrap yard in Wakaliga, a slum in Uganda s capital Kampala now baptised “Wakaliwood”. “It is going to be as big as Nollywood, Bollywood or even Hollywood – there s no reason why not,” writer, director, editor and producer Isaac Nabwana boasted of Uganda s informal film industry — boldly insisting studios in Nigeria, India and the United States will get a run for their money. “We think Hollywood people will come here,” he said. Raised by his grandparents in Wakaliga, which today has a population of just under 2,000 people, Nabwana s family didn t buy a television until 1984. Before that Nabwana would listen to descriptions of the movies watched by his older brothers at local video halls, the shacks where the majority of Ugandans still watch movies in local languages.

“They would tell you and I would imagine what was in that movie,” Nabwana told AFP. When he finished school, he began making and selling bricks to get by. Over nine years Nabwana, 42, built Ramon Film Productions, Uganda s first action-film company, fulfilling his childhood dream of making movies. Today he is still building. “We don t have enough props, we build them ourselves,” said Nabwana, explaining that the rocket launchers in his movies are made from frying pans and plastic tubes.  Cow blood was initially used as a special effect until it made the actors sick. Condoms full of red food colouring are now stuck to their chests for the gloriously graphic death scenes. “We need good cameras, software,” said Nabwana. “The biggest challenge is money.” But despite the hurdles, the married father of three, who founded Ramon in 2005, has produced about 46 feature length films. The most successful, “Who Killed Captain Alex”, was shot in one month in 2010 for about only $200 (184 euros). It s the story of the Tiger Mafia and the recurring villain in Nabwana s films, who rules Kampala with an iron fist but has gone on the run.

Captain Alex is sent to hunt him down, but is mysteriously murdered. Set during the present day, it was inspired by the era of Uganda s late dictator Idi Amin, which Nabwana grew up under. Released internationally a few weeks ago on YouTube, the trailer has been viewed more than two million times. “I loved the film so much that I moved into a third world slum to be part of it,” recalled Alan Hofmanis, 45, who had worked in the film industry in New York. Inspired after seeing some of Nabwana s work in 2011, he came to Uganda shortly after to track him down and has since become a key promoter. He said the Ramon films remind him of when he acted out the Indiana Jones films when he was a child — providing for a uniquely endearing cinema experience. But he said the key hurdle is that Uganda s film industry is “massively pirated”. “He thinks he has six days to make money,” Hofmanis said of Nabwana, who he described as “like Martin Scorsese but also trying to figure out how to distribute the films and do publicity”. “It s getting harder to sell the movies, with US pirated movies going for as little as 500 shillings (less than 20 US cents),” said Hofmanis. After the films are made, the production staff and actors, who usually have to supply their own wardrobe and do their own makeup, peddle them door-to-door across Uganda for up to 3,000 shillings a film, or around a dollar.