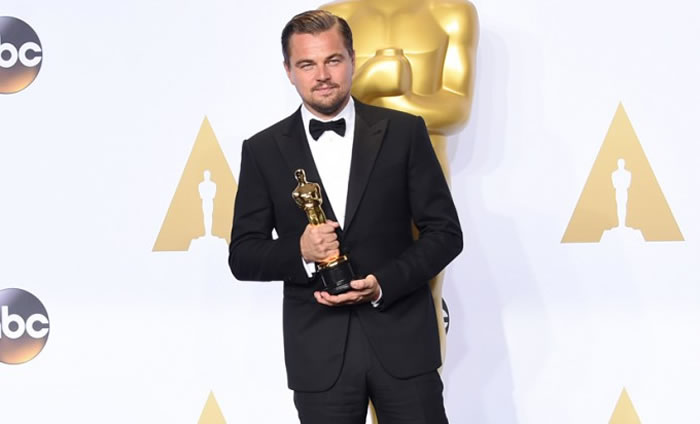 Rizwan Ahmed, Assistant Commissioner of the Inland Revenue department in Pakistani-held Kashmir, told AFP Tuesday he was “inspired” by the Titanic star “because he’d been nominated four times and he never lost faith despite losing”.

Though one of the world’s biggest and most bankable stars, the 41-year-old DiCaprio had never taken home the golden statuette, sparking a years-long meme-fuelled Internet campaign. He received a standing ovation at the Academy Awards on February 28 when he was finally recognised for his intense portrayal of 19th century fur trapper Hugh Glass in the survival epic “The Revenant”. “I wanted to convey this message of hard work and commitment in the face of adversity to my staff,” Ahmed said. “In honor of Lenoardo DiCaprio getting his long-awaited Oscar, the office of the undersigned wants to arrange a Tea Break for all the staff members,” the memo, sent to staff on March 3 and seen by AFP, said.

It pointedly noted that DiCaprio should have won an Oscar “for his role as Howard Hughes in The Aviator, or Jordan Belfort in The Wolf of Wall Street, or for his roles in The Departed, Gangs of New York, Django Unchained”. Ahmed also exhorted his staff to listen to DiCaprio’s Oscar speech, in which he spoke passionately about climate change, citing the actor’s final words: “Let us not take this planet for granted. I do not take tonight for granted”. The memo sent a titanic wave of delight among Pakistani social media users. “Hahaha! A cinema-buff bureaucrat! Don’t knock it, there are very few!” tweeted Hasan Zaidi. “How do I send a cake to go with that tea? I would love to do that,” wrote Shabab Ahmad Khan. Ahmed told AFP that chai, sweets and biscuits had been served during the break. –AFP