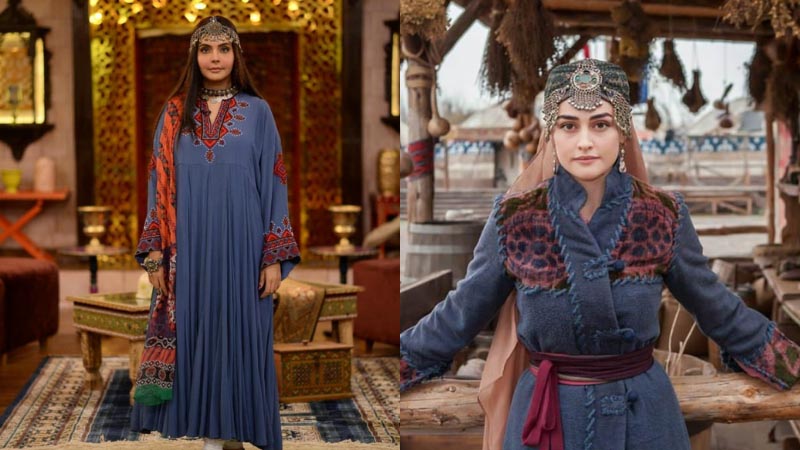 Nida Yasir is the latest target of Diriliş: Ertuğrul fans in Pakistan. That’s not to say they’re targeting her; they just think she dressed like Haleema Sultan from the TV show.

The Turkish historical fiction piece, following the rise of the very real Ottoman Empire, was introduced to Pakistan in 2020 and has since ascended to the top of the nation’s favourites list in a relatively short period of time.

Without further adieu, this is what Yasir wore on her Good Morning Pakistan episode with the legendary Umer Shareef and Nigar Award winning veteran actress Deeba Begum.

It looks awfully like something out of that Turkish TV show, but that’s not what it actually is. But when has the internet cared about what something actually is?

Yasir’s traditional blue dress looks like a classic, with its tribal embroidery, pale tones and the contrasting red details. Add in an Afghan matha patti and you have an individual looking awfully similar to what Sultan is seen wearing in the show. Check it out yourself.

Let’s now open the flood gates, and let in the trolls.

In case you were looking for a recipe, we got you.

This next guy is a little too intense.

This user’s all for the bargain!

Some were nicer than the rest. There’s nothing wrong with dressing like a TV character.

Some people wanted to know why everyone was so hyped up about Yasir.

At this stage we have to split from this narrative and explain what Yasir was wearing. For all its similarity to the Sultan’s outfit, it was actually a tribal outfit from the indigenous culture from Kailash. The tones, the sharp contrasting detail, patterns and the rust dupatta are all as the tribal women have donned it for centuries.

Pakistan, as a nation, has done wonders for the Turkish TV series. Neither the Ottoman’s, nor creator Metin Günay could’ve thought to make such a difference in a region so far away from home, but it happened. Right from the very top of the populace — notable politicians, celebrities and even the prime minister himself — people have sung praises for the show, some even calling it the greatest ever.