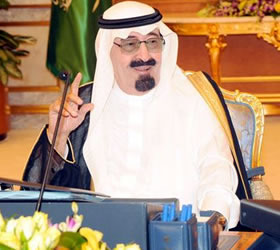 JEDDAH: Saudi Arabia has achieved most Millennium Development Goals adopted by the United Nations much before the 2015 deadline set by the international body, the Council of Ministers said in a statement after its weekly meeting chaired by Custodian of the Two Holy Mosques King Abdullah.

The Cabinet meeting said the ongoing UN General Assembly meetings were a good opportunity to review national and international efforts to achieve Millennium Goals. “The Kingdom’s strategy to achieve these goals emphasizes on sustained and comprehensive development,” it said.
The meeting decided to establish the Saudi Quality Association under the supervision of the Ministry of Commerce and Industry. “The association will spread a culture of quality and its concepts and will implement quality standards in the public and private sectors.” Addressing the meeting, King Abdullah highlighted the tremendous progress achieved by Saudi Arabia after its establishment by King Abdul Aziz. “It has become the center of attention of the international community thanks to cultural achievements and development in various sectors,” he said.

Speaking about  National Day, which was marked on Sept. 23, King Abdullah commended the efforts of people who worked for protecting the nation’s security and stability. He called for greater efforts to strengthen the Kingdom’s position in the comity of nations. The Cabinet commended the plan to establish an international charitable foundation bearing the name of King Abdullah as well as the newly opened Zamzam water purification project in Makkah, which was established at a cost of SR700 million.

Culture and Information Minister Abdul Aziz Khoja said the Cabinet reviewed the 46th report of Saudi Arabian Monetary Agency (SAMA) featuring major economic achievements in 2009. The report highlighted the Kingdom’s successful economic performance last year with a balance of payment surplus of SR85.4 billion. The Cabinet welcomed students in schools and universities all over the Kingdom into the new school year.

The Cabinet authorized Finance Minister Ibrahim Al-Assaf to hold talks with Japanese officials for signing an accord for the avoidance of double taxation and prevention of tax evasion. Talks will be held with the Philippines to sign an agreement for technical cooperation in agriculture and fisheries, Khoja said – Arabnews