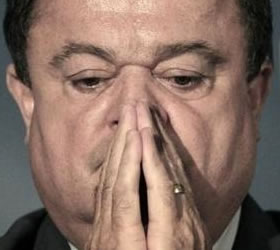 Romania’s interior minister has resigned, after police rallied against the government’s harshest austerity measures in years. The opposition is now demanding the resignation of the entire government, which introduced steep wage cuts to help the country overcome an economic crisis.

Romania’s Interior Minister Vasile Blaga announced his resignation after 6,000 police angry over a 25 percent wage cut marched to the presidential palace. Witnesses said police pelted the palace with eggs, with some shouting, “Get out, you miserable dog!” Blaga told reporters he deeply regrets the incident.
Blaga explains he submitted his resignation to Prime Minister Emil Boc, and he calls his move “one of honor.”  He says he realizes he leaves at a time when Romania seeks to join the European Union passport-free travel area, known as the Schengen Zone.  But he makes clear the ministry needs a new person at the helm after the police protest.  He says the police officers staged an illegal action and “forgot the oath they swore.” The gesture, he says, does not reflect all ministry employees and the courts should decide how to punish the protesting police.

He was to be replaced by Traian Igas, a little-known lawmaker from the governing Democratic Liberals. Romanian President Traian Basescu is also angry over the police protests.  He dismissed his police protection, saying it had undermined state authority, but his decision made it difficult for him to reach his office on time. Romanian television has been showing President Basescu driving himself to his office, smoking a cigarette and speaking on his mobile phone in his Dacia Logan, an inexpensive Romanian-manufactured car.  Stuck in traffic like any regular commuter in the capital Bucharest, Mr. Basescu tells reporters that he may be late for work.

The president can expect more obstacles on the road, as further protests are planned against government austerity measures, which include sharp wage cuts for public workers and tax hikes to fight the budget deficit. President Basescu’s government has been unable to pay wages and pensions without a $26-billion bailout loan from the International Monetary Fund and other lenders.  But in exchange for the deal, the IMF demands strong action to reduce Romania’s debt. In 2009, Romania’s economy shrank by more than seven percent and the government needs support from the IMF, the European Union and the World Bank, partly to pay state wages and pensions.

Amid mounting tensions, Mr. Basescu has been holding emergency talks with the country’s top police chief and the head of its anti-riot police, while the opposition has urged the prime minister to resign. Anti-austerity protests have also erupted in France, Britain, Greece, Spain and other nations struggling to balance budgets.

In Slovenia, another Balkan nation, thousands of public sector workers rallied Monday in an open-ended strike to protest plans to freeze their salaries for two years – Voanews