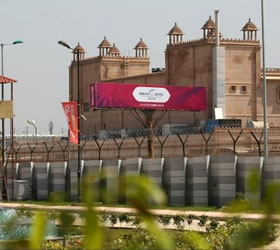 Having faced the prospect of a walk-out by some of the biggest nations in the Commonwealth last week, organisers here in Delhi are hopeful that the storm of negative publicity is passing, along with the late monsoon.

Delhi 2010 still has plenty of problems but competitors are moving in to an athletes’ village which was last week described as unfit for human habitation. By Thursday the majority of British athletes will have arrived, and apart from a few gripes, the feedback from team leaders is that they are now satisfied with what they are finding. Even the pedestrian bridge next to the showpiece Nehru Stadium looks to have been patched up after it collapsed last week.There is still a high level of nervousness among Indian officials and Commonwealth Games Federation leaders. Both sides have been falling out publicly in recent days with the CGF chief executive Mike Hooper now public enemy number one among the Indian media for comments he apparently made about the traffic during a meeting earlier this week.

The sensitivity is such that both Hooper and the CGF president Mike Fennell have gone to ground, refusing to speak to journalists in the run-up to this Games, which should have been a turning point for an event already fighting for its long-term place on the sporting landscape. With four days to go to the opening ceremony, the biggest concern is now security. With the Mumbai terror attacks still fresh in the memory, a Commonwealth Games in India was always going to present a significant security challenge.

But security officials both here and around the world are extending their advice ahead of Thursday’s long-awaited verdict on the religious dispute centred on the sacred site of Ayodhya in the north of the country. The Indian government yesterday named 470 places across the country which should be avoided by travellers and put the Indian air force on high alert.

Ayodhya has been the subject of a 60-year legal battle between Hindus and Muslims who both lay claim to the site. Believed to be the birthplace of the Hindu God Raman, in 1992 extremists tore down a mosque, vowing to build a temple there instead. On Thursday, the Indian Supreme Court will finally rule on the dispute and the Indian Prime Minister Manhoman Singh yesterday issued an appeal for calm. “Whatever be the nature of judgement, I think everyone should make every effort to maintain peace, harmony and tranquillity in the country,” Mr Singh said.

To say the court’s ruling is bad timing for the Commonwealth Games is quite an understatement. But the court has made it clear it is vital nothing interferes with the country’s constitution – even if the global spotlight is on India. The fear is that any images of religious rioting or violence will spread quickly via India’s highly competitive media – which has eagerly adopted the west’s 24-hour rolling news culture – sparking even more trouble. This would quickly be picked up by the rest of the world, which is already on alert for any problems linked to the Games.

For a country eager to show the world it has moved on from the religious problems which saw more than 2000 people killed in 2002 and now emerging as one of the world’s great economic forces, even minor trouble could be a major setback. A number of athletes have, of course, already highlighted security as a reason for not travelling to Delhi. And to try and calm those fears security had already been stepped up to extremely high levels.

There are 155,000 police and security officials on duty in Delhi and in more than a decade of covering these sorts of events, I cannot remember seeing such a visible display of force from a host nation. To put that number into context, it is more than the entire UK police force. The athletes village is subject to a series of checkpoints and guards armed with machine guns and AK47s are stationed behind sandbags every 100 metres or so along the road which takes athletes and media into the complex.

And yet, ordinary people I spoke to on Tuesday in the crowded chaos which is Old Delhi were warm and friendly. Despite all the problems and the national loss of face being felt by the politicians and upper echelons of Indian society, they spoke of their pride at hosting the Games and said they welcomed visitors from overseas. There remains, however, a question mark over how many of them will actually go and watch. Thousands of tickets for the opening and closing ceremonies remain unsold with many of the cheapest tickets – priced at 200 rupees (£2.80) – still available.

It’s a similar story with the 100 metres final – the blue riband event of any major Games. Part of that is down to the absence of the world’s biggest names. South Africa’s world champion Caster Semenya became the latest star to withdraw on Tuesday, citing problems with her back.

Delhi and India can still put on a show which will reflect its growing confidence as a nation and put the Commonwealth Games back on the map. But the potential for the event to backfire on them remains very real – BBC