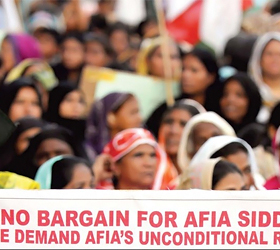 Hussain addressed the scores of people, estimated to be 300,000 by the MQM, who gathered on his call at MA Jinnah road, near Tibet centre, on Tuesday to condemn an American court’s verdict of Siddiqui’s case. On September 23, she was sentenced to 86 years in prison on seven charges, including the attempt to murder US military personnel.

The rally was declared successful as members of MQM-opposing groups including the Sunni Tehreek and Jamiat Ulema-e-Islam also participated in the rally. Representatives of the Pakistan Peoples Party, Pakistan Muslim League-Quaid, Karachi Bar Association, trade unions also joined to condemn the verdict of Dr Siddiqui’s case. Claiming that Siddiqui is innocent, Hussain demanded her release. “The Americans are responsible for what they have done to the world. America has killed innocent people in Iraq and Afghanistan,” he decried.

“The allegations against Dr Siddiqui are false as they could not prove them. America is answerable [not Dr Siddiqui],” he said, slamming the US. Hussain claimed that ninety percent of the world’s population is against the US and its policies. The MQM showed solidarity with Dr Siddiqui’s cause in more than one way – representatives of MQM’s Rabita Committee were sitting with Dr Siddiqui’s sister, Fauzia Siddiqui. Altaf Hussain called for a united stand on Dr Siddiqui’s case, urging all civil society groups to join in the “struggle”. “Dr Aafia is the daughter of the nation and a symbol of pride [as she] stood courageously and faced the trial. It was exemplary to see a Muslim woman not give up and fight,” Hussain claimed.

Security arrangements
A few hours before the rally, men in yellow caps guarded the entry and exit points of the venue, while a heavy contingent of police and other law enforcing agencies were also deployed. MQM’s security personnel searched each and every participant of the rally at the entrance. The police was seen on the roofs of buildings around MA Jinnah road while the paramilitary Rangers took their resistant positions after the rally ended.

Rallies across Sindh
Several rallies were organised in various parts of the province to protest against Dr Siddiqui’s sentence. Activists of the Pakistan Muslim League-Nawaz and the Muslim Students Federation held a demonstration outside the Hyderabad Press Club to condemn the sentence. Protesters shouted slogans against the verdict and claimed that the government has not taken the issue seriously.

Meanwhile, in Sukkur, a rally was led by Qutubud Din, the MQM Sukkur Zone incharge, during which protesters marched from Jinnah Chowk to the press club. Activists of the Sunni Tehreek and the Jeay Sindh Qaumi Mahaz also participated in the rally – Tribune