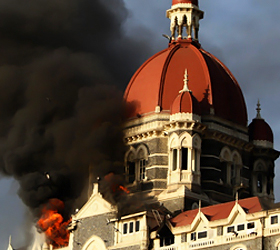 Intelligence agencies have intercepted a terror plot to launch Mumbai-style attacks on Britain and other European countries, according to Sky News sources.

Sky’s foreign affairs editor Tim Marshall said militants based in Pakistan were planning simultaneous strikes in London, as well as cities in France and Germany. He said the plan was in an “advanced but not imminent stage” and the plotters had been tracked by spy agencies “for some time”.

Marshall said an increase in drone attacks in Pakistan in the past few weeks was linked to attempts by Western powers to disrupt the plot. A number of these attacks (drone) were designed against the leadership of this particular plot.

He said the planned attacks would have been similar to the commando-style raids carried out in Mumbai by Pakistan-based gunmen in 2008. Then, the heavily armed militants launched an assault on various targets in the Indian city, killing 166 people.

US officials said America appeared to have increased drone aircraft attacks against al Qaeda-linked militants in Pakistan and might have killed a senior leader of the terror group. The officials declined to comment on specific plots in Europe or elsewhere but acknowledged drone strikes in Pakistan were meant to disrupt militant networks planning attacks.

Marshall added: “I am led to believe a number of these (drone) attacks were designed against the leadership of this particular plot, which had an al Qaeda and possibly some sort of Taliban connection projecting into Europe. “And they have killed several of the leaders – which is why the terror threat has not risen.”

The last time Britain raised its international terrorism threat level was in January. It went up to “severe” – the second highest level of alert in the five-tier system. On September 16, head of MI5 Jonathan Evans said there remained “a serious risk of a lethal attack taking place.” On Tuesday, The Eiffel Tower and the surrounding Champ de Mars park were briefly evacuated because of a bomb alert.

It was the fourth such alert in France’s Paris region in as many weeks. French Interior Minister Brice Hortefeux said on September 20 that France faced a real terrorism threat due to a backlash from al Qaeda militants in North Africa. He said there were growing fears of an attack from home-grown terrorist cells within French borders – Skynews