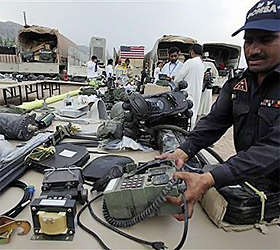 The Pentagon says U.S. and Pakistani military officials are discussing two incidents last week in which American helicopters crossed from Afghanistan into Pakistan to fire at militants – incursions Pakistani officials have strongly protested.

A spokesman, Colonel David Lapan, said that in rare instances when U.S. forces feel they must cross into Pakistan to protect themselves from insurgent attacks, they normally contact Pakistani authorities before or during the incident.  He acknowledges, though, that did not happen in the incidents last Friday and Saturday. “I think I can say that clearly that in these instances things did not occur the way that they are supposed to,” said Colonel Lapan.  “They attempted to contact the Pakistanis at the time of the incident, and were unable to, and then ended up contacting them after the incident and letting them know.  And so one of the things they are looking into is, ‘How did the communications break down?'”

Colonel Lapan could not say why it was not possible to reach Pakistani officials as the incidents were unfolding.  He declined to discuss whether there is an agreement for “hot pursuit” of militants fleeing across the border, which Pakistan says there is not. But the Pentagon spokesman said the U.S. forces were operating within their “rules of engagement” because they acted in self defense, responding to firing from militants inside Pakistan, who were attacking a NATO outpost and who also fired at the helicopters.

“I do not know that I would call it a disagreement,” said Lapan.  “But there are certainly discussions underway between our forces and the Pakistanis about this particular incident.  Again, what were the communications breakdowns?  What happened?  What was supposed to happen?” Colonel Lapan said it is not unusual for U.S. and NATO forces in Afghanistan to fire at militants across the border in Pakistan.  And, although officials will not confirm it, the Central Intelligence Agency reportedly conducts extensive attacks on militants based in Pakistani border areas using unmanned aircraft.

The New York Times reported Tuesday that such attacks have increased sharply this month.  Officials say, however, it is rare for U.S. forces to actually cross the border themselves.  In this case, Lapan said it was only helicopters that crossed over briefly, and no American or other foreign ground troops were involved.

But Pakistan said the incidents infringe on its sovereignty and violate the U.N. authorization for the foreign forces in Afghanistan – Voanews