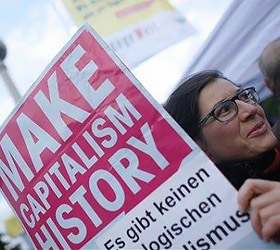 Strikes took place across Europe Wednesday in protest against government austerity measures. Unions say over 20 million jobs have been lost across Europe since the economic downturn began. Workers from across Europe took to the streets of Brussels on Wednesday in protest against European austerity measures.  Police say most of the protesters marched on the headquarters of the European Union. Union leaders hoped up to 100,000 people from 30 different countries would join the protest.

One of the demonstrators, Evelain Foncis, says people on low salaries shouldn’t have to prop up the country – that should be the banks’ responsibility. Millions of people in Europe have lost their jobs since the global financial downturn and European governments are reigning in public spending in a bid to combat major deficits.

Even as workers protested in Brussels on Wednesday, the European Union Commission proposed sanctions against EU countries that fail to bring down their national deficits. Belgium wasn’t the only European country hit by protests Wednesday. In Spain, unions, representing hundreds of thousands of workers, launched the country’s first general strike in eight years.

Some strikers reportedly scuffled with police and bags of garbage were left uncollected on the streets; protesters stopped trucks from delivering basic groceries and airlines were forced to cancel some flights. The strikes were called in protest against a number of austerity measures including wage cuts for civil servants and a labor market reform that would have made it cheaper for companies to fire workers.

Director of the General Workers’ Union in Spain Robert Tormamira said in the past three years two million jobs have been destroyed. Elsewhere in Europe, Greek transport workers and hospital doctors walked off the job. General Secretary of the Greek General Confederation of Labor Vangelis Bouzoulas said the people of Europe are protesting against high prices and increased unemployment. He said they are asking for better times and more work.

The Greek government has implemented strict austerity measures that have led to a series of strikes and protests. European countries handed Greece more than $100 billion in rescue loans earlier this year in order to save its economy. Protests also took place Wednesday in a number of other European countries, including Poland, Portugal, Ireland, and Italy – Voanews