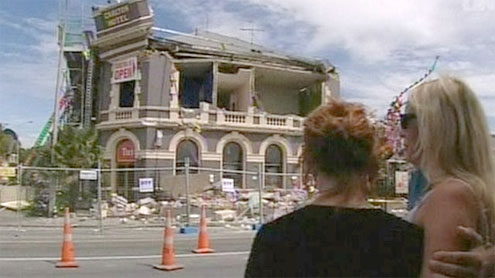 New Zealand has held a two-minute silence exactly a week after the devastating Christchurch earthquake.At 1251 local time (2351 GMT) on Tuesday afternoon, the whole country fell silent to mark the moment the deadly quake struck seven days ago.Rescuers downed their tools for two minutes before resuming their work.The death toll currently stands at 154, but officials say it could rise as high as 240 as dozens of people are missing; frequent aftershocks have not helped.The cost of the 6.3-magnitude quake is expected to reach NZ$20bn ($15bn; £9.3bn).Although of lower magnitude than last September’s quake, which killed no-one, this quake struck at shallow depth, when the South Island city was at its busiest.Nobody has been found alive since Wednesday.
Flags flew at half mast and traffic stopped. Church bells tolled across the country.In Christchurch, the noise of jackhammers and diggers working to clear the rubble fell silent. The only sound for two minutes was that of weeping, as Prime Minister John Key led a memorial outside the ruins of a church near the city’s cathedral, where more than 20 people are believed to still be buried.There a pile of rubble, collected from several of the worst-hit sites, was covered in ferns, the country’s natural emblem.”We gather to reflect on the precious gift of life,” said the Anglican Bishop of Christchurch, Victoria Matthews.”It’s very sad, this is an earthquake that’s claimed the lives of literally hundreds of people and that’s hard to put into words,” Mr Key told AFP after the two minutes’ silence.”This is a very dark moment for us but it’s a moment that we will rebuild from,” he said.

Further north, in Wellington, silent crowds spilled onto streets. People wept openly in front of parliament.In Auckland, hundreds gathered at the cathedral, in a moment mirrored in communities across the country.Rescue workers say that only a miracle could bring anyone out of the rubble alive.At a police briefing earlier in the day, Superintendent Dave Cliff said the death toll was likely to climb higher than the previous estimate of 200.”We need to start considering the figure of around 240 but (it’s) not locked in stone, because we’re still getting information in,” Mr Cliff said.Alongside the deaths has been an increased pace of births, with premature babies now crowding out the Christchurch Hospital’s neonatal unit.”Earthquakes do tend to hurry things along for those intending to deliver,” said Canterbury district health director David Meates, after 76 maternity patients were taken to hospital in the days after the February 22 quake.

Rescuers made another find – of a time capsule beneath a statue which had collapsed outside the cathedral.It included a glass bottle containing rolled-up parchment and a metal cylinder but will not be opened properly until in the care of experts.The government promised a thorough investigation into why some buildings, such as the Canterbury TV Tower, had been so badly constructed as to fall like houses of cards in the quake.The CTV building is believed to hold scores of bodies, including those of Thai, Japanese, Chinese and other foreign students who attended an English-language school there.”Obviously the earthquake was something that’s beyond our control (but) we are going to get answers for those families about what’s gone wrong,” said Mr Key.The prime minister also announced an initial NZ$120m package of subsidies that will pay the salaries of people who cannot return to work because of the quake damage – BBC