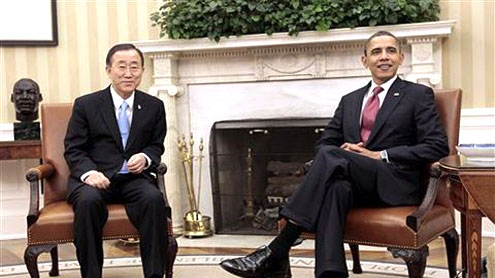 President Barack Obama and U.N. Secretary-General Ban Ki-moon met at the White House on Monday for talks dominated by the situation in Libya.  The U.S. ambassador to the United Nations, Susan Rice, also took part in the discussions and spoke with reporters.The talks came as the United States considers what additional options to use to deal with the bloodshed in Libya, where military forces loyal to leader Moammar Gadhafi battle opposition forces.Appearing at a White House news briefing after attending an Oval Office meeting between President Obama and Secretary-General Ban, Ambassador Rice referred to the U.N. Security Council resolution approved over the weekend.Approved unanimously, the resolution refers human rights violations in Libya to the International Criminal Court, and includes a travel ban, assets freeze on Libyan leaders, and an arms embargo.”These sanctions and accountability mechanisms should make all members of the Libyan regime think about the choice they have before them,” said Susan Rice. “Violate human rights and be held accountable, or stop the violence and respect the Libyan people’s call or change.  There is no escaping that critical choice.”Rice said all Security Council members are determined to ensure that sanctions work as swiftly as possible.  She repeated President Obama’s call for Mr. Gadhafi to step aside to prevent further bloodshed.Rice responded to comments by the Libyan leader in an interview with foreign reporters in Tripoli, in which he again refused to step aside, saying that all Libyans love him and asserted that al-Qaida is behind the opposition.”It sounds just frankly, delusional,” she said. “When he can laugh in talking to American and international journalists, while he is slaughtering his own people, it only underscores how unfit he is to lead and how disconnected he is from reality.”White House Press Secretary Jay Carney said again on Monday that the United States is “actively reaching out” to those in the Libyan opposition who are working to bring about a government that respects human rights and meets the aspirations of the Libyan people.  He called speculation about official recognition of any particular faction of the opposition premature.

Carney had this response when asked about the option of Moammar Gadhafi going into exile:”It would be a quick option and it would comport with our desire to see him step down, and remove himself from power,” said Carney. “We are most interested in the end of his treatment of his people, the end of the violence against the Libyan people.  And if exile is a quick option to make that happen, we would support that.  But he and others will be held accountable for their actions, regardless.”White House officials are not saying how that might happen, with whom President Obama might have discussed the option or where Mr. Gadhafi might go.Carney said the United States and the international community are not attempting to reason with the Libyan leader, other than making clear to him and those around him the choices they confront in the face of united international opposition.The White House and Ambassador Rice also pointed to the U.S. Treasury Department announcement on Monday that about $30 billion of Libyan assets in the United States have been frozen.Secretary-General Ban and President Obama also discussed the situation in Ivory Coast, with Ambassador Rice saying they expressed their concern about the escalation of violence there.They also discussed the independence referendum in South Sudan and “vital work” remaining for the U.N. and international community, and parties to the Sudanese conflict to resolve outstanding issues as the south readies for independence in July – Voanews