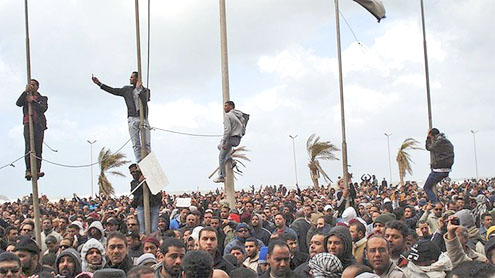 The United States has frozen $30 billion in assets controlled by Libyan leader Moammar Gadhafi and his family, in what the Obama administration says is the single largest seizure of foreign funds in American history.A senior Treasury Department official said Monday the several U.S. financial institutions have cut off access to funds belonging to both the Libyan government and the Gadhafi family. The shutdowns are part of U.S. President Barack Obama’s attempt to punish the Libyan leader for his government’s violent crackdown on anti-government protesters over the last 10 days.Treasury officials say some of the assets frozen since Friday belong to Libya’s central bank and its oil-heavy sovereign wealth fund, the Libyan Investment Authority. The Wall Street Journal reported that the U.S. determined both are directly controlled by Mr. Gadhafi. American officials say they believe Libya’s central bank has more than $100 billion in foreign currency reserves worldwide, while the sovereign wealth fund holds more than $70 billion.The U.S. moves have been closely coordinated with European financial institutions.The European Union voted Monday to impose its own sanctions against the Gadhafi family and more than 20 other senior Libyan officials. Germany went further, proposing a 60-day economic embargo to prevent Mr. Gadhafi from using oil and other revenues to repress his people.The EU action is significant because Europe has more leverage over Libya than the U.S. Eighty-five percent of Libyan oil goes to Europe, and Mr. Gadhafi and his family are thought to have significant assets in Britain, Switzerland and Italy. Switzerland and Britain already fhave rozen Libyan funds in response to a United Nations Security Council resolution against Libya.

There are different interpretations about whether the U.N. and EU curbs should extend to Libya’s sovereign wealth fund or be limited to Mr. Gadhafi and his family. For the ban to apply to the Libyan Investment Authority, it would have to be proven that the fund exists to personally benefit Mr. Gadhafi and his associates.The authority has heavily invested in Europe over the last five years. It has assets in some of Britain’s largest companies and sizeable stakes in Italian banks, defense contractors and a well-known soccer club – Voanews