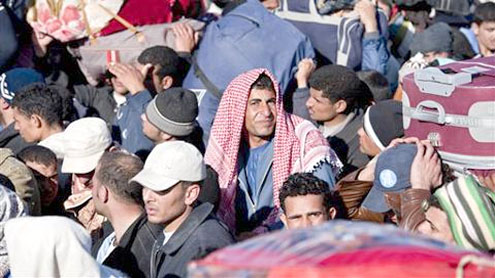 The United Nations refugee agency says over the past 10 days, more than 140,000 people have fled to Egypt and Tunisia from Libya.  The UNHCR says tens of thousands of people are stuck at the borders and in urgent need of help.The U.N. refugee agency says the situation at the Libya-Tunisia border is chaotic. It says 14,000 people crossed the border Monday, the highest number to date.The agency says it is crucial to move tens of thousands of people away from the overcrowded border to avoid a humanitarian crisis.  But transportation is scarce.UNHCR spokeswoman Melissa Fleming says the agency has erected 1,500 tents, which can shelter 12,000 people.  And she says two airlifts planned for Thursday will deliver tents and supplies for up to 10,000 people.“We have now visited the border entry point to Tunisia.  What is unfortunate is that thousands of people are waiting on the Libyan side of the border to enter.  Some for as long as three days.  They are obliged to spend the night outside in the bitter cold without shelter.  We are very concerned that a large number of sub-Saharan Africans are not being allowed into Tunisia at this point.  We are in negotiation with self-appointed volunteers from the local community who are guarding the border,” she said.Fleming says nearly 70,000 people have crossed from Libya into Egypt since February 19. She says the majority are Egyptians.She says the UNHCR is particularly worried about thousands of refugees and asylum-seekers stuck inside Libya.  She says the refugees come mainly from Iraq, Palestine, Somalia, Sudan and Eritrea.  She says they have been living in Libya for a long time but now are desperate to leave.Fleming reads a recent message sent by a refugee to UNHCR staff in Libya describing the fearful conditions under which he and his family are living.  She says refugees and migrants from sub-Saharan Africa are particularly vulnerable.“We are under attack by local people who are saying that we are mercenaries killing people.  Let me say that they did not want to see black people. There is racism.  We need help.  Please, please, please, where is the humanity?  Where is the United Nations?  I am crying.  I need help.  Our home was burnt down.  Ten Somalis were killed in Libya in the last seven days.  Why is nobody concerned about the Somali migrants in Libya?  We are victims of racism and ruthless exploitation,” she said.Fleming says the UNHCR offers assistance to those refugees who are able to reach its office in Tripoli.  She says the agency’s 24-hour hotline continues to receive desperate calls from refugees in Libya and their family members outside.  She says they say they feel trapped, threatened and hunted – Voanews

56 new drug inspectors to be inducted in KP health dept