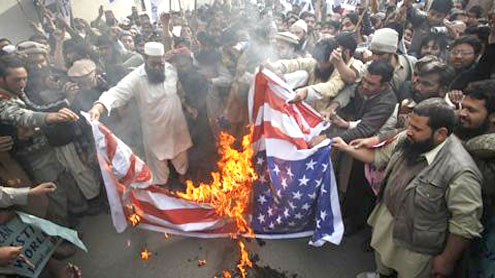 The case of an American arrested in Pakistan for shooting two men dead has sparked anger in Pakistan and soured relations between Washington and Islamabad.  It turns out that Raymond Davis, who said he opened fire to ward off an attempted robbery, was a security contractor for the CIA.  American agencies have become reliant on security contractors to fill personnel gaps.Analysts say U.S. intelligence agencies, the State Department, and the military have become increasingly dependent on contractors in places like Iraq, Afghanistan and Pakistan, doing everything from guarding people and convoys to collecting and analyzing intelligence.Scott Stewart, vice president for tactical intelligence at the private intelligence firm Stratfor, says using contractors gives the U.S. government flexibility during surges in trouble spots. “You look at the security budgets of organizations like the State Department, and you look at the CIA’s budget and the cycles that it runs in over time, there are booms and busts.  And when they run into that bust period of time, it’s very difficult to start cutting staff. And so it’s just easier to cut contractors.  It’s far less painful,” he said.

But while providing flexibility, the increased use of security contractors is controversial and has irked some host governments. Some contractors have been accused of offensive behavior, including killing civilians. Afghan President Hamid Karzai has tried to get security contractors out of his country. Pakistan’s Inter-Services Intelligence directorate has demanded an accounting of all security contractors operating in Pakistan.  Some contractors also have been accused of stealing millions of dollars.Shawn Engbrecht, who has a company training security contractors, says the problem is that U.S. agencies don’t have the same level of control over contractors as they do over their own employees.  He calls for private security contractors to be licensed.”We can either all come to the table together and adjudicate and negotiate and compromise and figure out a universal game plan on how to build private security companies into this grand scheme of maneuver, represented by DOD [Department of Defense] and DOS [Department of State], or we’re going to continue to let it evolve in its own evolutionary manner where every little or different company goes its completely own way and we will, in the end, suffer chaos, waste, corruption, and inadvertent deaths,” he said.

Exactly what tasks Raymond Davis performed as a security contractor in Pakistan remain murky.  Published reports agree that at a minimum, he was providing security for a team of CIA officers and contractors working out of a safe house in Lahore.  Whether he played a more active role in intelligence operations is not clear.  But Stewart says it is likely the CIA would for secrecy reasons want to use its own people to provide personal security instead of embassy officers.”Quite frankly, there are also some operational concerns there as far as the CIA is concerned. So they want to handle things in-house, and so they will use, where they have the capability, people from their Office of Security to provide a security function.  And they will augment those OS [Office of Security officers] with contract employees,” he said.Shawn Engbrecht, who has himself worked as a private security contractor in Iraq, says that, as a general rule, using contractors gives the CIA some distance from operations that may come to light. “The more of that stuff that you can outsource, the more you have – and the CIA loves this – plausible deniability. ‘Well, he’s just a civilian and kind of subcontracted out.  Yeah, he’s a member of the team, but he’s not really one of us.’ So they are actually able to expand their reach without increasing their overall risk,” he said.The U.S. has repeatedly described Davis as a member of the “administrative and technical” staff of the embassy and is thus entitled to diplomatic immunity – Voanews