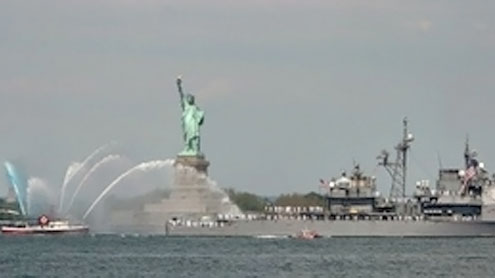 WASHINGTON:  The US military will send a warship to the Mediterranean next week as a first step in a defense shield to protect Europe from a potential strike from Iran’s missile arsenal, a defense official said.The USS Monterey, a guided missile cruiser equipped with Aegis radar designed to detect ballistic missiles, is due to depart next week from its home port in Norfolk, Virginia for a six-month mission, said John Plumb, principal director of nuclear and missile defense policy.The ship’s launch fulfills the US administration’s goal of deploying military hardware for the shield in 2011.After President Barack Obama announced a new missile defense policy in 2009, Plumb said “now here is our first concrete demonstration of our commitment to the missile defense of our deployed forces, allies and partners in Europe.”We said we were going to do it, and now we’re doing it.”The Ticonderoga-class ship, which will conduct exercises with US forces in the region, will form part of a planned “routine presence” by similar vessels supporting the system, he said.Guided missile cruisers have been sent to the Mediterranean previously but this was the first time such a ship had been deployed to back up the missile defense system, he said.The NATO alliance endorsed the shield at a summit in Lisbon last year but skeptics of the program have questioned the reliability of the anti-missile weaponry and whether more sophisticated interceptors will be ready on time.Russia also has voiced opposition to the planned system, which will eventually include additional land-based radars and interceptors along with Aegis ships.

The United States plans to deploy land-based radars later this year in southern Europe but negotiations are still underway, said Plumb, without saying which countries might host the sites.As part of the “phased” approach, land-based SM-3 interceptors are due to be deployed in Romania by 2015 and in Poland by 2018, with more advanced versions of the weaponry to be introduced at each stage.The military is still developing a land-based model for the SM-3 interceptor, which is currently deployed on naval ships.The Obama administration says the missile defense system is primarily aimed at the potential threat posed by Iran’s nuclear program and its growing number of medium-range missiles – Yahoonews