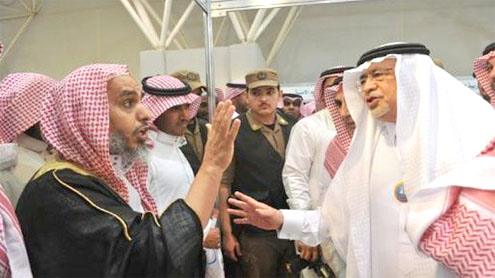 RIYADH: Several activists, alleged to be members of the Commission for the Promotion of Virtue and the Prevention of Vice, stormed the Riyadh book fair on Wednesday evening, roughed up participants and relayed orders through a mike for women to dress up properly and move graciously or face the consequences.The Haia members also opposed the invitation of some intellectuals who have allegedly criticized Islamic teachings to the seminars being held on the sidelines of the exhibition.The ugly situation shocked Minister of Culture and Information Abdul Aziz Khoja, who was also present at the fair at that time. “The situation was brought under control within no time,” said Mohammed Al-Abis, a spokesman for the ministry.He said the nasty scene occurred on the second day of the fair, which attracted a huge crowd of book-lovers. Khoja was reportedly so upset that he left the fair premises through the back door.“The troublemakers were detained by the security personnel briefly, but were released later,” said another ministry source who refused to be identified.He said at least six activists were involved. “One of them even seized a microphone and started warning women visitors and journalists to comply with the so-called code of conduct and religion,” he added.Another tried to snatch a Saudi TV camera and warned women they would go to hell, said Abdullah Alshamri, another ministry official who was present at the scene.Alshamri said, “The whole episode was very insulting to the image of the Kingdom, its government and its people, who believe in Islam and good conduct.”As a result of Haia intervention, photography at the fair has been restricted to licensed persons, Sabq.org electronic newspaper reported.Earlier, Indian Ambassador Talmiz Ahmad said the fair is one of the most important literary and cultural events in the Gulf region.He was speaking during a reception held in honor of Indian scholars who have come to attend the book fair.Ahmad said his country is proud to be the guest of honor at this important event and to become a part of the intellectual excitement that is prevailing in Saudi Arabia and in the Arab world in general.“I am happy that a number of Indian scholars of Arabic are present with us to discuss with their Arab counterparts the different aspects of the intellectual ferment that is sweeping our region,” Ahmad said, pointing out that this interaction will help define the contemporary predicament, when young men and women, with demanding aspirations seek a place for themselves in a new society whose dawn has just broken.At the inauguration of the book fair at the Riyadh Exhibition Center on Tuesday, Khoja broke away from the traditional ribbon cutting ceremony. Instead the minister recited a verse from the Holy Qur’an to mark the opening of the show. India is the guest of honor at this year’s book fair, described as the largest annual book exhibition in the Middle East.Hundreds of publishing houses, distributors and a large number of retail booksellers are participating in the event, which will run through March 11.Seminars and a number of cultural events such as literary evenings are also lined up on the sidelines of the show.This year, more than 700 publishing houses from 30 countries with over 280,000 titles are participating. Featured books are in English, French, Persian and Turkish, among other languages.  The fair, which opens for the public from 10 a.m. to 10 p.m., is aimed at drawing a large number of visitors – Arabnews