‘Banker to the poor’ forced out 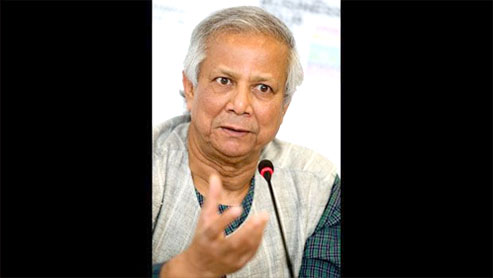 DHAKA: Nobel laureate Muhammad Yunus has been removed from his position as head of microlender Grameen Bank, Bangladesh’s central bank said on Wednesday, following allegations of irregularities in its operations.Yunus, 70, set up Grameen Bank and has been its managing director since 2000. Lauded abroad by politicians and financiers, he has been under attack from Prime Minister Hasina Wajed’s government since late last year, after a Norwegian documentary alleged Grameen Bank was dodging taxes.Yunus has denied any financial irregularities and his supporters say he is being discredited by the government because of a feud with Hasina dating back to 2007, when he tried to set up a political party while Bangladesh was ruled by an interim military government.“We have delivered a letter to the Grameen Bank that Muhammad Yunus has been removed,” said the central bank governor’s spokesman, A.F.M. Asaduzzaman.On Tuesday, a central bank official said a letter had been sent to the Finance Ministry demanding Yunus retire immediately because he had been in his post at Grameen for nearly a decade longer than the law allowed. The official retirement age of managing directors at commercial banks is 60.Yunus has said the bank’s board, which is mainly made up of borrowers, allows him to stay on as long as he is able to perform his duties.In a sign of a rift within the microlender, Grameen Bank said Yunus was staying on while a government-appointed chairman said the order had been implemented. It was unclear how the deadlock would be resolved.“This is a legal issue. Grameen Bank is taking legal advice. It is also examining all the legal aspects of this issue,” Grameen Bank said in a statement.“Grameen Bank has been duly complying with all applicable laws. It has also complied with the law in respect of appointment of the managing director,” the statement added.“According to the bank’s legal advisers, the founder of Grameen Bank, Nobel laureate professor Muhammad Yunus, is accordingly continuing in his office.”

Separately, Grameen’s government-appointed Chairman Muzammel Huq told Reuters: “Today I received the letter from the central bank and I was directed to implement the decision.”“The decision has been implemented with immediate effect.”Last month, Finance Minister Abul Maal Abdul Muhith said Yunus should step down, as he was now “old and we need to define the bank’s role and bring it under close regulation.”Hasina herself has called Yunus a “blood-sucker of the poor” and sharply criticized Grameen Bank’s microlending practices, especially after the Norwegian documentary that alleged the bank had for tax purposes shifted funds provided by Norway’s aid agency in the 1990s from one legal entity to another.The documentary sparked criticism in Bangladesh and abroad of Yunus, whose bank has provided about $10 billion in small loans to people, most of them women, to fund businesses and help them escape poverty.A Norwegian government investigation into the allegations, however, found no evidence of misuse of funds or corrupt practices.Yunus has been summoned to appear in three separate court cases involving Grameen Bank in Bangladesh over the past month.Yunus, dubbed “banker to the poor,” was awarded the 2006 Nobel Peace for providing a small loans program, which has led to the creation of similar programs in other developing countries – Arabnews