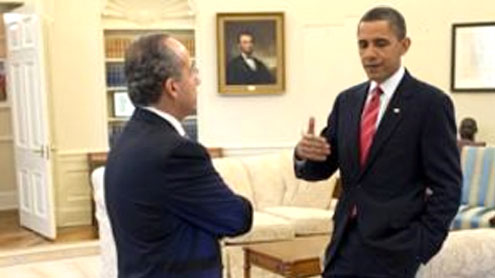 Mexican President Felipe Calderon Thursday visits Washington, where he is expected to talk with President Barack Obama about the drug war, economic issues and immigration.  The two presidents will meet after recent strains in U.S.-Mexican relations.Presidents Obama and Calderon will talk in the Oval Office, weeks after a U.S. immigration and customs agent was killed in Mexico, and after U.S. diplomats’ criticism of Mexico’s fight against drugs was sent to the website WikiLeaks.Thursday’s meeting was planned late last year, but last month’s shooting of Immigration and Customs Enforcement special agent Jaime Zapata has added urgency to the security-related part of the agenda.On Sunday, Mexico’s military arrested the alleged local head of the Zetas drug gang in the northern state of Coahuila, for whom the gunman was believed to be working.A White House official Wednesday praised Mexico’s cooperation in investigating Zapata’s murder.  But officials in Washington have complained that U.S. agents are not allowed to carry guns in Mexico.Recently-leaked cables from U.S. embassy personnel said that Mexico’s armed forces are ineffective and corrupt.President Calderon responded last week that U.S. law enforcement agencies are not well coordinated, and that too little effort is going toward reducing Americans’ demand for illegal drugs.In a meeting with Mr. Calderon last May, President Obama promised to fight that demand.“U.S. demand for drugs helps to drive this public safety crisis within Mexico, and so we have got an obligation not to drive the demand side of the equation,” said President Obama.Mr. Obama is expected to assure his Mexican counterpart of his continued support for the Merida Initiative, a security cooperation agreement between the two countries.The initiative was to expire this year.  But a senior administration official says the U.S. has spent more than $400 million to implement it so far this year, and will add another $500 million by year’s end.Immigration issues also are expected to be high on Thursday’s agenda, although no breakthroughs are expected.

Last May, Mr. Calderon, speaking through an interpreter, called on Americans to oppose tough laws to stop illegal immigration, like the one passed last year in the state of Arizona.“We will retain our firm rejection to criminalize migration, so that people that work and provide things to this nation will [not] be treated as criminals,” said President Calderon.The two leaders likely will address trade and economic issues as well.  And they are expected to discuss agenda items for the Group of 20 economic summit, scheduled for this year in Mexico.Mr. Calderon also is expected to meet with John Boehner, the speaker of the House of Representatives.  The Mexican president began his visit Wednesday by meeting with U.S. business leaders.White House spokesman Jay Carney said this week President Obama might discuss the turmoil in the Middle East when he and President Calderon speak to reporters.  An administration official said Mexico has been helpful in addressing the Middle East violence in the United Nations Human Rights Council – Voanews