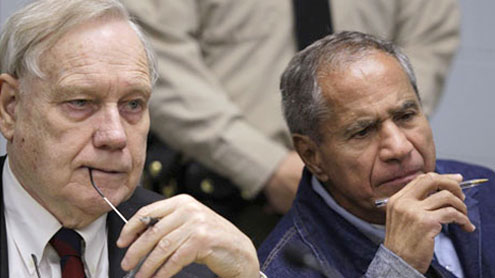 A review board in California has again denied parole for Sirhan Sirhan, the man convicted of assassinating Senator Robert Kennedy in 1968.The board said Wednesday he can be considered again for parole in five years.Sirhan appeared at his hearing represented by a lawyer, Bill Pepper. The Associated Press newswire reports Sirhan expressed “deep regret,” but also said he did not remember shooting Kennedy, who was a presidential candidate at the time.The 66-year-old Arab immigrant is serving life in prison for shooting Senator Kennedy in a Los Angeles hotel moments after Kennedy gave his victory speech in the 1968 California Democratic primary election. Sirhan was initially sentenced to death, but that was commuted to life in prison.Sirhan has argued his defense lawyer was secretly working with the government. He has also said he was hypnotized at the time of the shooting and that another gunman killed Senator Kennedy.Prosecutors said Sirhan’s diary included passages calling for Senator Kennedy’s death because of his strong support for Israel – Arabnews