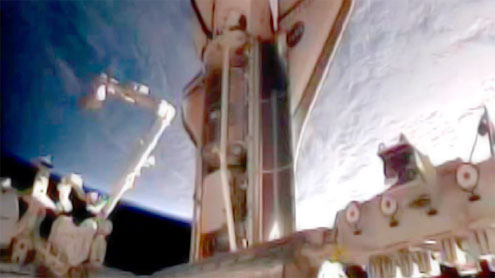 Two American astronauts have completed the last shuttle Discovery spacewalk before the craft is retired from service.Steve Bowen and Alvin Drew spent six hours Wednesday completing chores outside the International Space Station as the 30-year U.S. shuttle program nears an end later this year.Among the tasks, the two men vented ammonia from a broken pump to make it safe in case the unit is returned to Earth on a later mission.The U.S. space agency NASA said the astronauts completed their entire to-do list, despite getting off to a slightly delayed start. Bowen’s pressurized suit had a slight leak, which the astronauts were able to fix.It was the second of two spacewalks for theDiscovery crew. Tuesday’s spacewalk also lasted about six hours.Discovery undocks from the space station Sunday for the two-day journey home. First launched in 1984, this isDiscovery’s 39th and final space mission.When it is retired,Discovery is expected to be placed on exhibit at the Smithsonian’s National Air and Space Museum in Washington, or at its annex location just outside the U.S. capital.The two other remaining U.S. shuttles — Endeavour and Atlantis — each have one mission left, with launches scheduled within the next several months – Voanews