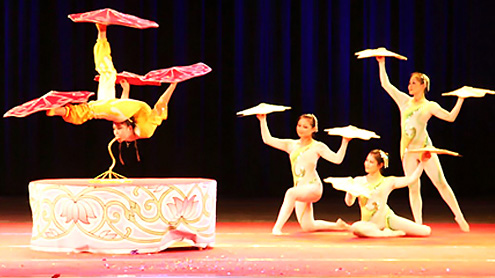 VANCOUVER, March 1 (Xinhua) — The celebrated Soldier Acrobatic Troupe of China wrapped up a successful North American tour on Tuesday night with a sold-out show in Vancouver, British Columbia, the group’s only Canadian date.

Appearing at The Center in Vancouver for Performing Arts before an audience of 1,840 people, the 45 performers, all soldiers from Guangzhou Military Region, dazzled those in attendance with their precision routines that drew many rounds of thunderous applause in appreciation.

Following American shows in New York, Washington, D.C., Philadelphia, Los Angeles and San Francisco as part of its Cultures of China, Festival of Spring tour, Ma Rupei, deputy head of the Overseas Chinese Affairs Office of the State Council of China, who was travelling with the troupe, said Vancouver, a city with a large Chinese-Canadian population, provided a fitting finale to the “global tour.”

“According to the warm reaction in the theater here in Vancouver, our performance is well accepted by the Chinese overseas and local mainstream communities. It proves that the culture of China is of long standing as well as both extensive and profound,” Ma said.

“I believe the Cultures of China, Festival of Spring, described as the overseas version of Chinese Spring Festival Evening, will become more and more popular among Chinese overseas,” Ma added.

With a troupe made up of acrobats, featured dancers, ballet dancers, magicians, unicyclists and a contortionist, the performers did not let the audience down with their dazzling two-hour show.

Among the memorable performances was a contortionist who emerged from a giant red lantern, a henhouse springboard featuring nine male acrobats springing off three thin but flexible pieces of wood, a group of straw hat jugglers, and seven unicyclist who kept the audience on the edge of their seats with their impressive feats of balance.

The standout performance of the night was given by two acrobats performing their rendition of the Butterfly Lovers to huge applause from the audience as they sailed above the stage.

Johnny Fong, the show’s promoter, said he wanted to bring the troupe to Vancouver after first seeing them perform during the opening ceremony of the Beijing Olympic Games in 2008.

“I wanted the Vancouver people and the B.C. people to have the opportunity to see one of the best teams because this is also a cultural exchange. I think with this being the Chinese Lunar New Year this is very meaningful for China, the best being here and showing the acrobatics and also the magic to our B.C. people,” Fong said.

Ahead of the performace, Prime Minister Stephen Harper sent a special message to the acrobatic troupe, welcoming them to Canada. He called the event a “wonderful gesture of diplomacy” and nowhere was it “more graciously received than in Canada.”

“Our two countries share a special bond. More than one million Canadians trace their roots to China. They have made invaluable contributions to Canadian life and preserved and promoted an historic cultural legacy,” the prime minister said.

“As Sino-Canadians across the country welcome the new year, I would like to commend everyone involved in orchestrating this spectacular celebration,” Harper added.

The Soldier Acrobatic Troupe closed the show with an acrobatic interpretation of an excerpt of Swan Lake, to huge applause from the appreciative audience. In 2006, the troupe gave 150 performances of Acrobatic Swan Lake during a residency in Las Vegas.

“It was fantastic, we loved it,” said Dr. Kris Bulcroft, president of Capilano University, exiting the theater with her husband Rick. “I just liked the energy and the color and the beauty of the physical form. It was wonderful.”

Murray Rasmusson, who was visiting from Red Deer in the neighboring province of Alberta, called it the “greatest Chinese show” he had ever seen.

“The acrobatics, the dancing, the youth and the vigor of the group, it’ s really fantastic,” Murray said.

Dr. Jan Walls, a noted local expert on China, said the performances had evolved greatly since he first saw them in the early 1980s.

“Their techniques, their talent, not just the human pretzel-kind of contortions that they do, but the artistic quality of their presentation, and the coordination, is just it’s beyond anything I could have imagined,” he said – xinhuanet

Years after vanishing in Iran, US man proven alive

Years after vanishing in Iran, US man proven alive