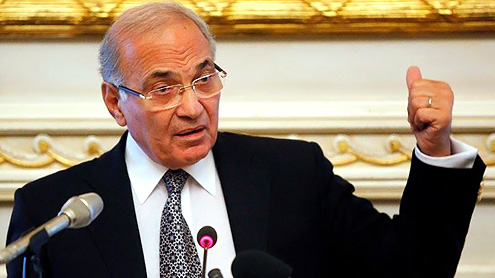 Former air force officer Ahmed Shafiq was named prime minister by Mubarak shortly after the Jan. 25 outbreak of anti-government protests in a failed attempt to quiet the unrest. Mubarak stepped down Feb. 11 and the military took control of the country, but Shafiq remained in office at the head of a caretaker government.

A brief statement posted on the military’s official website said it had chosen former Transport Minister Essam Sharaf as the new prime minister and tasked him with forming a new caretaker Cabinet to run the government throughout a transition back to civilian rule.

Leaders of the 18-day uprising that forced Mubarak to step down had been pressing the military to fire Shafiq, arguing that a prime minister sworn in by the ousted leader should not stay in office. They also argued that his Cabinet was filled with figures from the old regime.

The prompt acceptance by the military of Shafiq’s resignation shows the sensitivity of the ruling generals to the demands of the uprising’s leaders, but many in Egypt now believe the military should put its foot down and focus on restoring law and order in this country of 80 million people.

Egypt has been gripped by a crime wave it had not seen in living memory, with a marked rise in armed robberies, arson and street battles between rival criminal gangs over territory. Demoralized and hated by many for their perceived brutality against protesters, security forces have yet to fully take back the streets. They numbered around 500,000 on the eve of the protests.

The military police, meanwhile, has stepped in to fill the vacuum, but its personnel don’t have the intelligence capabilities or the manpower to efficiently police the country.

Beside security, one of the main tasks now facing Sharaf is to revive the economy hard hit by the protests. The stock market has been closed for more than a month and foreign tourists have only begun to trickle back in small numbers. Investor confidence has been badly hit too by the dozens of criminal investigations into corruption allegations against senior officials from the former regime – Arabnews