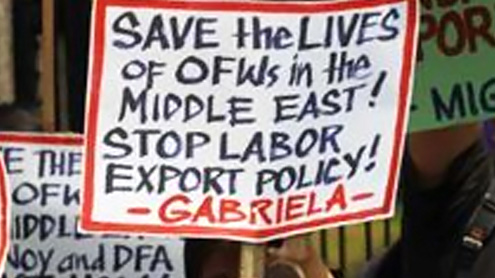 AJDABIYAH, Libya (Reuters) – Libyan rebels calling for air strikes to set up a “no-fly” zone came under attack by a warplane for a third day on Friday as Muammar Gaddafi tried to loosen the opposition’s expanding grip on a key coast road.

Eastern-based rebels spearheading a two-week-old revolt told Reuters they were open to talks only on Gaddafi’s exile or resignation following attacks on civilians that have brought global condemnation and triggered a probe at the war crimes court.

“If there is any negotiation it will be on one single thing — how Gaddafi is going to leave the country or step down so we can save lives. There is nothing else to negotiate,” said Ahmed Jabreel of the rebel National Libyan Council in east Libya.

“We are not going to negotiate any political solution. We want him put on trial, but if we don’t give him an exit, we know more people will be killed,” said Jabreel, an aide to ex-justice minister Mustafa Abdel Jalil who heads the council.

Western nation have called for Gaddafi to go and are considering various options including the imposition of a no-fly zone, but are wary about any offensive military involvement to stabilize the world’s 12th-largest oil exporter.

In the east, rebel volunteers said a Libyan government warplane bombed just beyond the walls of a military base held by the opposition in the town of Ajdabiyah but did not hit it,

“We were sat here, heard the jet, then the explosion and the earth shook. They fell outside the walls,” said Hassan Faraj, who was guarding an ammunitions store at the Haniyeh base.

Another volunteer guard, Aziz Saleh, said two rockets had been fired and had landed just outside the walls of the base.

Amid growing international concern about dwindling food and medical supplies in some rebel-held areas, diplomatic efforts are accelerating to end a conflict that the West fears could stir a mass refugee exodus across the Mediterranean to Europe.

U.S. President Barack Obama said he was concerned a bloody stalemate could develop between Gaddafi and rebel forces but gave no sign of a willingness to intervene militarily.

“Muammar Gaddafi has lost the legitimacy to lead and he must leave,” Obama said, the first time he has called in public for Gaddafi to leave Libya, although he has urged his exit in written statements by the White House.

The popular uprising against Gaddafi’s 41-year rule, the bloodiest yet against a long-serving ruler in the Middle East or North Africa, has knocked out nearly 50 percent of the OPEC-member’s 1.6 million barrels of oil per day output, the bedrock of its economy.

The upheaval is causing a humanitarian crisis, especially on the Tunisian border where tens of thousands of foreign workers have fled to safety. But an organized international airlift started to relieve the human flood from Libya as word spread to refugees that planes were taking them home.

Venezuela’s President Hugo Chavez pushed a vague peace plan for Libya, saying he had spoken to his friend Gaddafi who had supported the proposal for a negotiating commission, accusing the West of eyeing the North African nation’s oil.

But Saif al-Islam, a son of Gaddafi, said on Thursday that Libya did not need outside help to solve its troubles.

Rebels holding the port city of Zawiyah, 50 km (30 miles) west of the capital, Tripoli, said they had launched counter-attacks against Gaddafi’s forces massing in the area and warned supplies of medicines and baby milk were running low.

“Women and children are at home while the men are armed and roam the streets and city limits in anticipation of a major attack by pro-Gaddafi forces,” resident Ibrahim told Reuters by telephone, giving only one name.

The Pentagon said there was evidence Gaddafi’s forces were dropping ordnance but it was not clear if warplanes were bombing rebel forces.

As international efforts progressed to isolate the Libyan leader, Austria widened an asset freeze list to include a top official at the Libyan Investment Authority, Mustafa Zarti, because of possible ties to Gaddafi’s inner circle.

Gaddafi’s government took foreign journalists on a tour of western Libya on Thursday as part of efforts to show he was in control.

Towns and villages erupted in jubilation as the convoy passed through. Crowds of supporters shouted “God, Muammar, Libya, together” and children kissed portraits of Gaddafi.

Yet signs of resistance were apparent. In several towns, buildings had been torched and many house fronts were covered with anti-government slogans, a Reuters reporter said.

In Zawiyah, residents said Gaddafi’s forces had deployed in large numbers over the past days. “We estimate there are 2,000 on the southern side of town and have gathered 80 armored vehicles from the east,” resident Ibrahim said, adding a battalion had also come from the west side.

The government says it is not using military force to retake rebel-held cities although one official did not rule it out if all other options were exhausted.

The International Committee of the Red Cross (ICRC) said reports indicated two Libyan Red Crescent ambulances were shot at in Misrata, west of Benghazi, and two volunteers were wounded. The ICRC has 12 staff in Benghazi including a medical team visiting areas outside the city in cooperation with the Libyan Red Crescent.

In The Hague, International Criminal Court prosecutor Luis Moreno-Ocampo said Gaddafi and members of his inner circle could be investigated for possible war crimes committed since the uprising broke out in mid-February – Yahoo News