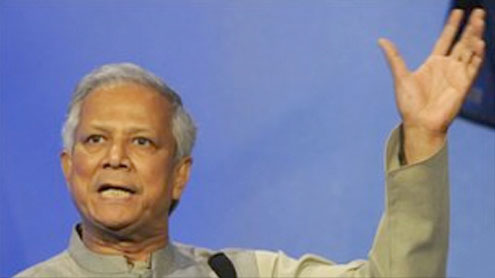 Bangladesh’s High Court is set to resume its hearing into whether Nobel Laureate Muhammed Yunus was illegally fired from the microfinance lender he founded.Mr Yunus’s lawyers laid out their case on Sunday before the court was adjourned.Last week, the central bank fired Mr Yunus from Grameen Bank saying he violated the country’s retirement laws.The bank provides small loans to millions of borrowers.Attorney General Mahbubi Alam said the court was likely to give its ruling on Monday, the Associated Press news agency reported.

During Sunday’s hearing, lawyers for Mr Yunus argued that the central bank did not have the power to remove Grameen Bank employees.The central bank, also known as Bangladesh Bank, has claimed that Mr Yunus did not get its approval when he was re-appointed director in 2000.As a result, he is holding the position illegally.However, some of Mr Yunus supporters say that his dismissal was politically motivated.Mr Yunus has spoken out against the current government, lead by Prime Minister Sheik Hasina.In 2007 he attempted to form his own political party.The Prime Minister has accused Grameen Bank and other microfinance institutions of charging high interest rates and taking advantage of the poor – BBC