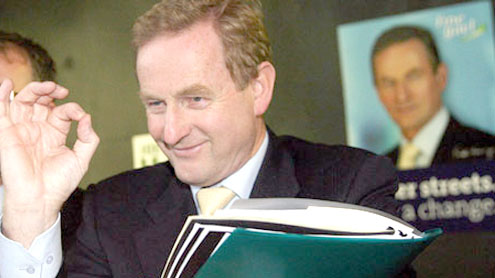 Irelands two largest parties have agreed to form a new coalition government after the Fine Gael party trounced the ruling party in last week’s parliamentary elections.Leaders from the center-right Fine Gael party and the second place Labor party have drawn up a plan for their new government. It again promises to seek better terms for repaying a multi-billion-dollar bailout from the International Monetary Fund and European Union.The plan also includes a goal of shrinking Ireland’s deficit to less than the EU ceiling of 3 percent by 2015. The new government does not seek any major changes in the old government’s austerity program, but says it will restore cuts in the minimum wage.Irish voters ousted the ruling Fianna Fail party and Prime Minister Brian Cowen because of its handling of Ireland’s economic meltdown.Fine Gael leader Enda Kenny is expected to be elected prime minister when the new parliament meets for the first time.Irish voters were angry that the Fianna Fail government sought a bailout from the EU and IMF for the battered Irish economy. Under the terms of the loan, the government must slash spending and civil service salaries.The Irish government fell deep into debt after it stepped in to rescue banks hit hard by the collapse of real estate prices in 2008 – Voanews