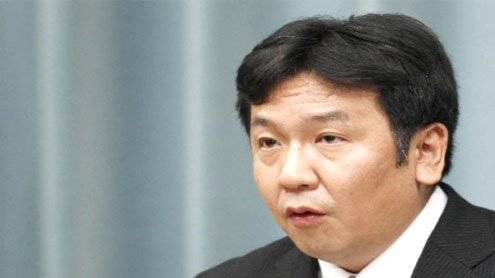 Japanese news media say Chief Cabinet Secretary Yukio Edano will temporarily serve in the additional post of foreign minister, replacing Seiji Maehara who resigned abruptly Sunday.Maehara acknowledged having received an illegal $610 campaign donation in 2008 from a South Korean national. His resignation comes after only six months on the job.In an apology to the Japanese people Sunday, the 48-year-old Maehara said he regretted causing “mistrust,” despite what he called “his pledge to seek clean politics.”He was seen as a leading candidate to succeed embattled Prime Minister Naoto Kan.His admission is widely seen as undermining the prime minister’s promise to root out “money politics,” following a political fundraising scandal by a member of the ruling Democratic Party of Japan, Ichiro Ozawa.Japanese law prohibits foreign campaign donations to Japanese candidates. Maehara said Friday that his campaign took a $610 donation in 2008 from an ethnic Korean woman he has known for years who runs a barbecue restaurant in Kyoto.Maehara said he did not know about the donation at the time, but that he took responsibility for it. He said he would return the money.The main opposition Liberal Democratic Party accused him of taking illegal donations totaling more than $ 2,000 over the past four years – Voanews