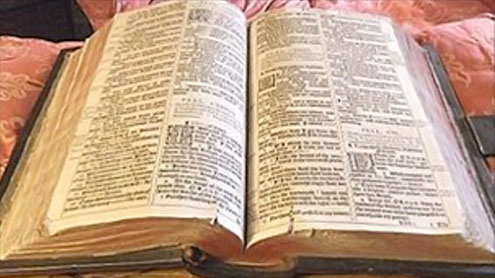 A rare original King James Bible has been discovered on a shelf in a Wiltshire church.The discovery was made by residents researching the history of St Laurence Church in Hilmarton, near Calne.Geoff Procter, a member of the parochial church council, said they read about a “fine chained Bible in a glass case” at the church.They then made the link with a Bible that had been sitting on a shelf at the church for a number of years.Mr Procter said: “We started doing some research and discovered that the Bible that, as far as I’d known, had always stood on a shelf at the church was in fact 400 years old.”Everybody or nobody.There are fewer than 200 original printings of the King James version known to exist. And it is believed that the rediscovered Bible is one of the few remaining editions printed in 1611.“It’s one of those sorts of information that you don’t know whether you should tell everybody or nobody,” said Mr Procter.”But we thought that it was such an important artefact of the church and indeed the Church of England generally that we thought we ought to do some more research.”Described as a fragment, despite most of the Bible being intact, it was first “rediscovered” in the 1800s.Since then it has suffered from both the ravages of time and some human interference.”The Reverend Francis Fisher found it in 1857 realised it was important and then tidied it up,” explained Mr Procter.”He actually carved a cover from oak but trimmed the pages so that in places the top of the pages are missing.”The church now intends to get a glass case to keep the Bible in – partly for security and partly to protect it for future generations but also because the history books say it was kept in one.

Mr Procter said the most important thing about the Bible was that it was meant to be a living working book for people to live by.”Well I think what it’s going to do is enable us to talk about the Bible,” he said.”Because in a secular world it’s seen as an important document it will actually bring the opportunities to us to go and discuss it in more detail.”When we took it for evaluation to the curator of a Bible museum, one of the first things he said was whatever you do you must display this so that people can read the word.”That stuck with me – you know the fact that it’s what it says rather than what it is – BBC